Germany′s domestic intelligence agency warns of IS sympathizers | Germany | News and in-depth reporting from Berlin and beyond | DW | 19.10.2017

Germany’s domestic intelligence agency says IS sympathizers returning to the country could pose a security risk. The agency's head also warned of the increasing threat of cyberwarfare. 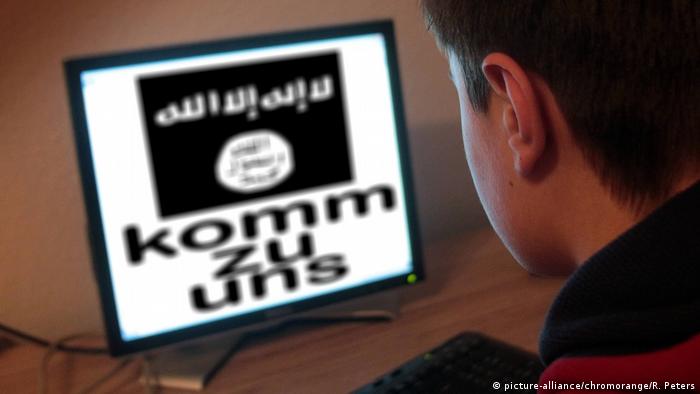 One would think that Germany's Office for the Protection of the Constitution (BfV), the country's domestic intelligence agency, would be relieved by news of the fall of the "Islamic State" (IS) terror group's Syrian capital in Raqqa and its subsequent retreat. Heavy IS losses could dampen the morale of potential attackers in Europe and Germany.

One might assume that the more influence IS loses in the region, the less appealing its ideology might become. But Germany's domestic intelligence agency contends that things are not that simple.

"We see the threat of children, socialized by Islamists, and thus accordingly indoctrinated, returning to Germany from a war zone," BfV President Hans-Georg Maassen said in Berlin on Wednesday.

According to the BfV, more than 950 Germans are currently in Syria and Iraq: of these, 20 percent are women and five percent are children. Security authorities assume that, as the situation on the ground there deteriorates, many of them will soon be returning to Germany.

The BfV believes that, if that happens, it could pose a security risk to the country. Authorities say their concern is compounded by the fact that IS directly targets children and youths in its propaganda. Some videos found online even show children participating in executions. Maassen says he fears "the possibility that a new generation of jihadis is being created."

Maassen said that all members of society need to "take a very serious look" at what his agency outlined as a threat and be prepared to defend themselves against it. The BfV has, among other things, set up a hotline for those seeking advice or offering tips. The agency is also hoping to get help from asylum seekers. Maassen told DW that his agency has already received hundreds of tips from refugees. "We operate on the assumption that many of these tips are real and thus worth us following them up;" he said.

The BfV also outlined on Thursday what it called another potential area of threat: cyberwar. Maassen has long been warning about Russian cyber activity, although his fears that Russia would attempt to influence Germany's recent election with fake news appear not to have come to fruition. Such concern generally was heightened after the 2015 cyberattack on the IT system of Germany's lower house of parliament, the Bundestag. The BfV believes that Russia was behind that attack.

Speaking at a public hearing of the Parliamentary Oversight Committee for Intelligence Agencies (PKGr) in early October, Maassen said that the decision of whether or not to use stolen information is always a "political decision." Adding that he feels decision-makers in Moscow may well have decided that, "the political costs of using such information in the German elections was simply too high." Russia experienced significant backlash in the US over its alleged meddling in the country's 2016 presidential election. The incident made the general public wary "that there was Russian involvement, of a disinformation campaign," Maassen said.

The BfV also announced it has registered an uptick in Germany-related cyberactivity emanating from Iran. As evidence, the agency presented a fake Angela Merkel quote that was broadly disseminated on new sites across the Middle East and Eastern Europe as part of an anti-Saudi propaganda campaign.

Maassen addressed what he called the "looming threat of a poisoning of the digital nervous system." He used the threat as justification for further technical upgrades at his agency, saying the "power to launch cyber counterattacks can no longer be a taboo subject." However, the legal framework for such activity does not exist in Germany, nor are there any binding rules on the subject in international law.