Germany′s churches reimagined: Practicing faith in a pandemic | Germany | News and in-depth reporting from Berlin and beyond | DW | 31.05.2020

Plexiglass, silent organs and disinfectant — this is the new normal in Germany's churches. With several outbreaks traced back to religious services, church leaders are trying to balance spiritual needs and health risks.

Father Tarcisius Paukovitsch beams as if his church in the city of Worms were bursting at the seams with worshippers, though of the 200 available seats only 24 are now allowed to be filled, and fewer than 20 actually are.

The Catholic priest warmly greets his parishioners for the weekday Mass, as if nothing has changed. Later, however, the community will have to exchange the sign of peace (usually accompanied by a handshake) through smiles and eye contact alone. Throughout the Mass, the organ remains silent, though Paukovitsch belts out one "Hallelujah" despite a ban on singing, as communal singing is believed by scientists to bring together two risk factors for the spread of the coronavirus, namely people gathering indoors and the exchange of respiratory droplets.

Read more: Religious celebrations at the time of Coronavirus

The sign of peace and singing are not the only things that have changed. The 24 seats allowed by physical distancing rules are clearly delineated with tape. Paukovitsch wears a face mask as he celebrates the Mass, and diligently disinfects his hands each time he hands out the Holy Eucharist. Other churches, like the famous Cologne Cathedral, have taken things a step further by putting plexiglass between the altar and the pews. In the Church of Saint Joseph in Berlin, priests give out the holy bread with gloved hands.

Religious services were allowed to restart across Germany at the beginning of May, following nearly two full months of forced closures as the country sought to slow the spread of the pandemic. 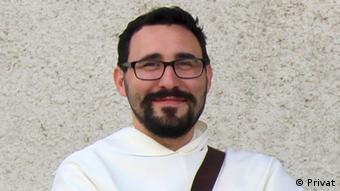 "That was painful, personally painful," Paukovitsch told DW. Not only was the celebration of Mass suspended, but also group Bible study, youth outreach and visits to care homes. For the 38-year-old, all of these things are part of the sermon. He has only been fully ordained as a priest for a year, having spent nine years as a member of the Dominican Order of Preachers.

Perhaps this is why, as he details the work he and his fellow Dominicans did during the crisis, he comes across as enthusiastic rather than proud. The group organized an emergency telephone help line for the elderly, podcasts for parishioners and daily messages online.

"For the children we wrote letters, put together arts and crafts kits and workbooks," he said. The church bells rang for everyone as a sign of "community bound together by faith." It is clear how happy he is to be able to observe Mass with other worshippers again, and how strange it is for him, the way they have to go about it now.

It was painful, too, for so many religious communities across Germany to cancel some of the holiest celebrations of the year. Catholics and Protestants had to observe Easter under lockdown, as did the Jewish community for Passover. Muslims held iftar — the daily breaking of the Ramadan fast — mostly at home, without the typically large communal gatherings. For many, streaming religious services just weren't enough, or were too strange to feel comforting — such as watching Pope Francis deliver an Easter sermon in an empty St. Peter's Basilica, usually packed to the rafters with tourists and worshippers alike.

For many others, it remains unclear how to proceed. In the southeastern city of Regensburg, the Catholic church celebrated Mass five minutes after midnight on the first day it was allowed. In the central city of Magdeburg, the bishop has not allowed any services for weeks, citing both the health risk and the sanctity of the traditions of Mass. Many Protestant congregations in Berlin, for example, are still providing only streaming services and have not reopened their doors to the public.

What is clear is that everything is different now. Some bishops have encouraged a return to normal routine; others are wary. Pastors and priests are making efforts to balance two communal requirements — spiritual needs as well as reducing any public health risks.

Outbreak cluster traced back to church

The risk to public health is even more of a concern after it was reported last week that at least 40 coronavirus infections originated at single service at the Gospel Christian Baptist Church in Frankfurton May 10. Despite claims from the church that all hygiene and physical distancing rules had been followed, 180 people took part in the service without wearing the mandatory face masks.

This outbreak followed a similar pattern that has played out across the globe. South Korea's first major wave of infections was traced to one service at a protestant mega-church, the United Arab Emirates saw its relatively low infection rate skyrocket after relaxing restrictions for Ramadan, close-knit communities of Orthodox Jews in New York City have been devastated by COVID-19 and France's initial outbreak is largely believed to have originated at a church gathering in the city of Mulhouse, where about 2,000 gathered together from several countries.

Although much is still unknown about how the novel coronavirus spreads, many factors that compound the risk have already been clearly identified by scientists. Nearly all of those factors come together at gatherings of multiple people in an indoor space.

But Paukovitsch is optimistic that new ways can be found to reach the faithful while still protecting them from the risk of infection. "Where are the people? Where do they live? How can we celebrate with the faith community where they are?" he asked. To that end, he has considered giving his sermons from a hill at a local vineyard, or at a large open park or a drive-in movie theater.

"We have to have new ideas, find new ways," said Paukovitsch. Nothing too radical, of course, but when one is motivated "a lot can be accomplished and reimagined."