Construction on a bike highway - hoped to connect communities to make high-speed, emissions-free commuting possible - is underway in Germany. But with funding in question, will this bikers' dream still come true? 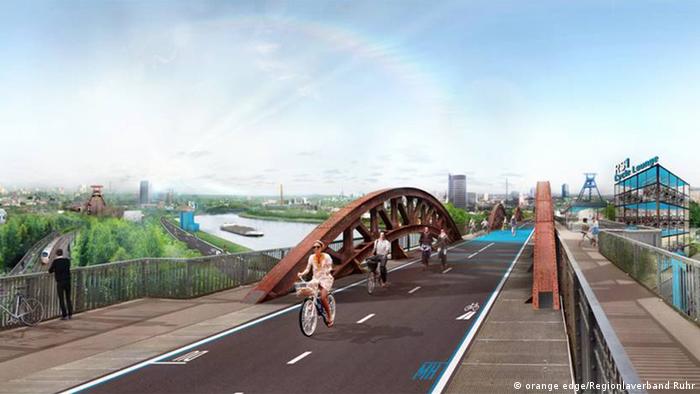 German autobahns are famous for lacking speed limits - now, bike autobahns may continue the trend. Following in the footsteps of other northern European countries, Germany is building a traffic-free bicycle highway: the Radschnellweg Ruhr, also known as RS1.

The bike autobahn is planned to span 101 kilometers - from Duisburg to Hamm, in western Germany - by 2020. If completed, it would connect 10 towns and could take 50,000 cars off the road per day, reducing Germany's annual CO2 emissions.

By November 2015, 11 kilometers of the road were primed for pedaling between the cities of Essen and Mülheim, in the highly populated Ruhr region of western-central Germany.

Funding from the European Union, the state of North Rhine-Westfalia and the Ruhr Regional Association (RVR) got the project going.

However, a current lack of funding might hinder its full completion. And some question the benefits, at a cost of nearly 2 million euros per kilometer ($3.3 million per mile).

But what is actually the purpose of bicycle highways, and are they worthy of public funding? 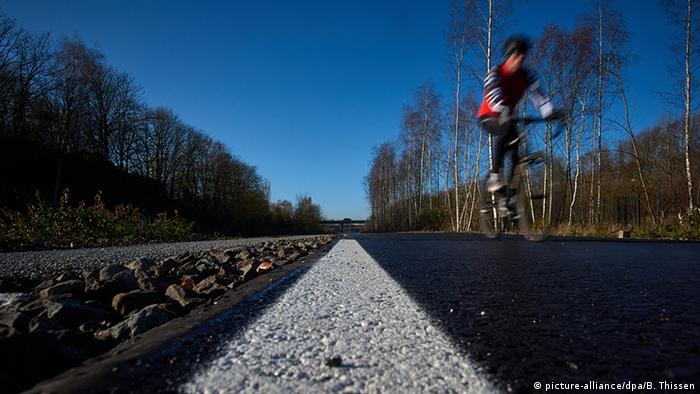 Why a bike autobahn?

According to the German national cycling club ADFC, Germany already has about 200 long-distance cycle routes tallying up more than 70,000 kilometers, in addition to smaller, regional bike paths within cities and on the countryside.

But the RS1 bicycle highway would be different.

Like highways for cars, the bike autobahn is designed to have flat surfaces and straight distances without crossroads, together with illumination and winter-weather maintenance.

It includes a larger separation between pedestrians and cyclists, which should insure better safety, especially for wide loads such as cargo bikes.

"The RS1 will be a basic element for everyday mobility," Maria Wagener, head of the regional development at the RVR, told DW.

The bike autobahn would allow fast and safe transport over long distances, also opening the doors to the use of electric bikes as a way to replace cars. In contrast with other bike roads, the RS1 is not planned only as a hobby route, but rather as daily route for workers and students. 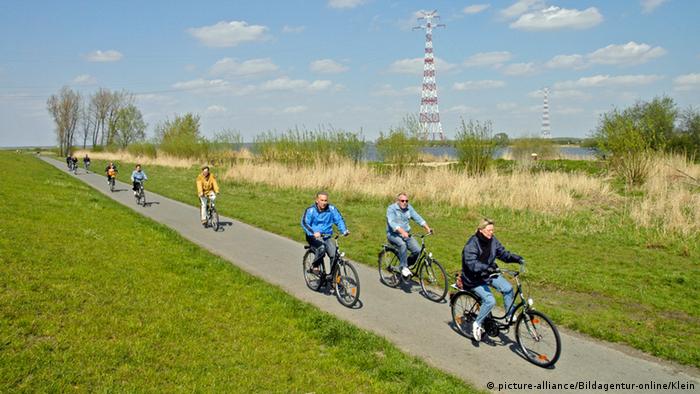 Other bike paths in Germany are mostly used for pastime purposes

What are the benefits?

According to the Ruhr Regional Association, 10 city centers and four universities in the Ruhr metropolis will be easily connected. The association says that using bikes instead of cars will allow citizens to save up to 50 percent of driving time.

The RVR estimates that the bike autobahn will take 50,000 cars off the road every day, helping to ease traffic congestion in the Ruhr area and reduce CO2 emissions - a release of 16,600 tons less per year is expected.

What about the cost?

This is where dream becomes nightmare.

The cost-benefit relation presented by the RVR is optimistic: Benefits equal nearly five times more than costs. Figures indicate the bike autobahn would save 11.5 million euros yearly on medical expenses due to the health benefits of greater physical activity and reduced pollution, while it would also save 6.3 million euros through prevented accidents. 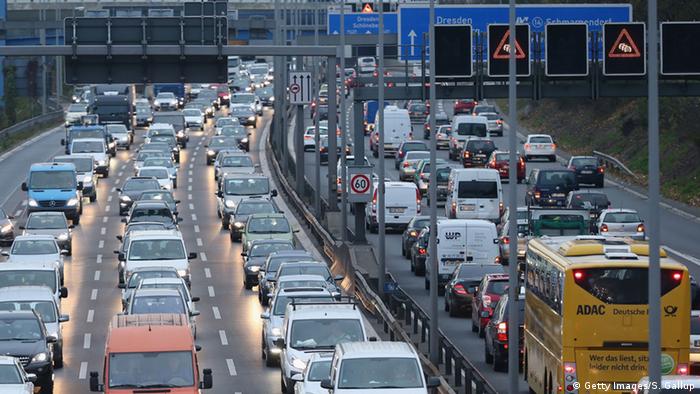 Although the German autobahn is famous for fast speeds, at peak hours traffic can come to a standstill

But money is lacking to complete the project, estimated at 184 million euros.

For the first 11 kilometers, the project received 2.8 million euros in support from the European Union. But the state of North Rhine-Westphalia and cities involved in the project must take on costs of the remaining 90 kilometers on their own.

Whether the project will be completed is still under discussion. Other projects are taking priority, Wagener explained. "But we believe this a really beneficial project - and once it has been started, it should be continued."

"The planning of transport routes takes time," said Meier. "We have to consider the availability of space, the traffic legal measures and the impact on overall traffic."

Almost three-quarters of this (126.5 million euros) will be used to actually build the roads to the required standards. The rest will be distributed among taxes, planning costs, land purchase and illumination infrastructure.

Meier pointed out the relatively low cost for building the bike autobahn - highways for motorized vehicles cost between 15 and 20 million euros per kilometer.

Are there other hindrances?

Besides financial issues, interaction with other kinds of traffic as well as with pedestrians is also causing debate - and slows down the project. 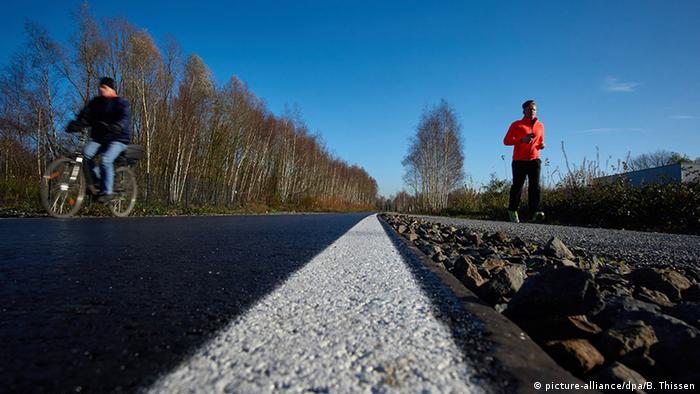 The RS1 is being built for both bikers and pedestrians

Martin Randelhoff, director of a popular blog related to transport issues on the area, believes the concepts and the plans confusing.

"Some people are afraid of the 'autobahn' concept and wonder even if there is a minimum mandatory speed to ride on such roads," he told DW. "There is lack of clarity."

Randelhoff added that he did not see the lighting infrastructures functioning, and could not see how the winter service would work. He also pointed out that smaller width for the bike path in some areas could be problematic.

"The standards are not fulfilled everywhere," Randelhoff said. "And the inclusion of wide pedestrian areas may force bikers to reduce the speed for safety reasons."

Does the bike autobahn have a future?

Randelhoff conceded potential benefits: "The RS1 can boost the use of e-bikes and improve traffic problems in the area."

"But for that, you would need really good infrastructure," he added.

And such infrastructure cannot be implemented without funding from the towns involved. Regardless, project promoters are still optimistic.

Meier pointed out that 60 percent of citizens support the project. "We are working with the central and local governments to set a final decision about funding," he added. 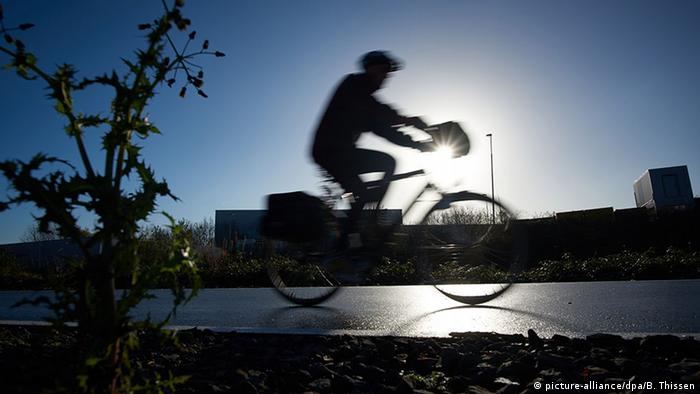 Whether the RS1 will receive full funding is still uncertain

Meanwhile, studies are being carried out for six more ambitious bike autobahns in the region, as well as in other parts of Germany such as Munich.

But for now, German bikers will have to settle with 11 kilometers of car-free bike highway.

"Each kilometer counts, this is our motto," Wagner said.

Cycling for the environment

Cycling doesn't have to be a solitary affair. One group in Mexico is trying to raise environmental awareness by urging people to get on their bikes and out of their cars with group bike rides. (18.09.2015)

France recently announced plans to install 1,000 kilometers of solar roadways. But why solar-paneled roads? How do they work? Are they really worth the cost? DW's environment desk takes a look at the pros and cons. (15.02.2016)