German Chancellor Angela Merkel has called for the cancellation of all unnecessary public events after the coronavirus claimed three more lives in Germany on Thursday. The virus is an 'unfamiliar challenge,' she said. 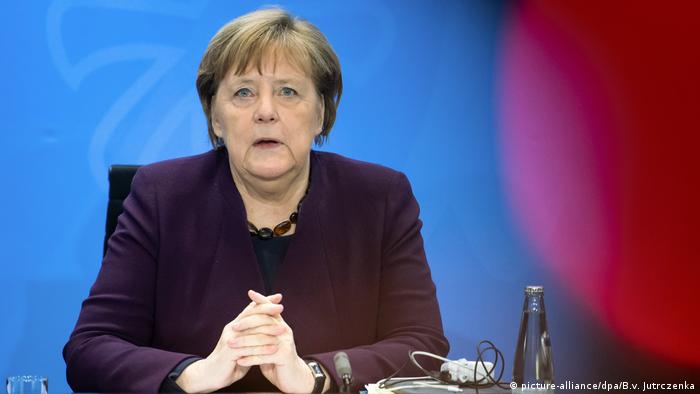 German Chancellor Angela Merkel on Thursday called for more public events to be cancelled and alluded to the possibility of school closures as Germany reported three more deaths linked to the outbreak of coronavirus, also known as COVID-19.

"This is a call to all," she said in a press conference. "Where possible, social contact should be avoided."

All unnecessary events with less than 1,000 people to be cancelled, she said, stepping up an earlier call to cancel all events with over 1,000 attendees.

Regions particularly affected by the outbreak retained the option of closing all schools on a state by state basis, for example by moving forward the start of the upcoming Easter holiday, she said. Minutes before the press conference began, French President Emmanuel Macron had announced that all schools and universities in France would close starting on Monday.

Current measures are planned with a timeline of 4-to-5 weeks in mind. "This time period is crucial in terms of how things will develop," the chancellor said.

The German leader said the coronavirus outbreak is even more exceptional than the 2009 Eurozone Debt Crisis.

"We are in a very unusual situation," she added. "Extreme situations require extreme measures. This is anything but a small point in the course of history. It's a decisive moment that demands a lot from us."

The two male patients were the the first deaths outside of North Rhine-Westphalia, the German state where the majority of cases have been reported.

The total number of COVID-19 cases in Germany currently stands at 2,078.

Earlier in the day, German President Frank-Walter Steinmeier called on people in Germany to adapt their routines in the wake of what the World Health Organization has now called a "global pandemic."

"We need to change our daily lives — not gradually, but right now," he said. "With everything we know today, we are looking at some very serious developments to come."

He described the outbreak as a challenge "that we can and will overcome, thanks to our well-functioning health system."

"Older people, grandparents and their families should rethink their habits, for example by avoiding local public transport, stopping hugging people and not attending large public events," she said.

The effects of a coronavirus infection have proven particularly severe for elderly people and those with underlying health conditions.

The eastern German city of Halle closed all schools and kindergartens, but some are concerned that closing schools can put grandparents who step in as caregivers under risk by putting them in contact with young children who may be infected.

"The surge is extremely quick," Germany's federal government agency for disease control and prevention, the Robert Koch Institute, announced. On Wednesday Chancellor Angela Merkel suggested that up to 70% of the population could become infected.

Merkel's CDU party have canceled a conference scheduled for April 25 because of the outbreak, when Merkel's successor as party leader was supposed to be elected.