The right-wing populist Alternative for Germany (AfD) has sued former party chief Frauke Petry for trademark infringement. Petry left the AfD to form The Blue Party after accusing her old party of being too extremist. 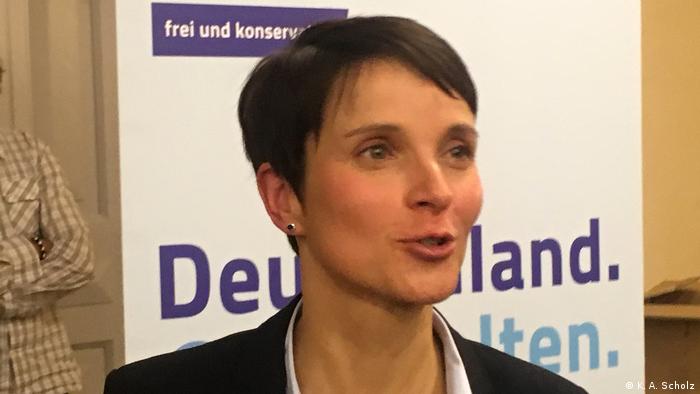 The Alternative for Germany (AfD) has filed a lawsuit against ex-party chief Frauke Petry in a branding dispute, the Bild newspaper reported.

"The AfD sued me in Munich to cancel the trademark I had registered for The Blue Party," Petry told Bild.

Petry left the AfD after its success in the September 2017 election, accusing the party of being too extremist.

In October, she submitted a trademark for The Blue Party, and in January it was registered at Munich's patent office.

AfD spokesman Christian Lueth told Bild that the party sued Petry to prevent her from benefiting from the AfD's reputation.

"Our logo and similar markings or colors are protected. We want to prevent imitators or political freeloaders from raising their profiles on our name and fooling the public," he said.

Former AfD co-chair Frauke Petry has founded a new party, according to German media reports. The "Blue party" has been registered, but Petry has not confirmed she is behind it. (12.10.2017)

The prosecutor's office in Dresden has charged former AfD co-chair Frauke Petry with lying under oath about campaign financing in 2015. Petry's immunity from prosecution was lifted by Saxony's state parliament in August. (04.10.2017)

The Alternative for Germany (AfD) believes its former head Frauke Petry stole data on party members, and one report claims it intends to sue her. AfD members' data may come in handy if Petry plans a new party of her own. (06.10.2017)