The prosecutor's office in Dresden has charged former AfD co-chair Frauke Petry with lying under oath about campaign financing in 2015. Petry's immunity from prosecution was lifted by Saxony's state parliament in August. 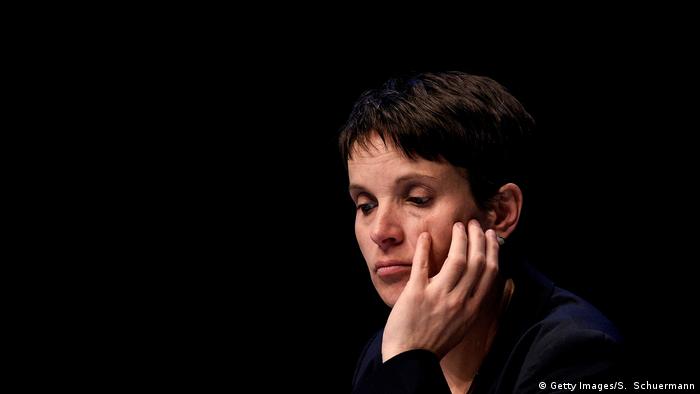 Frauke Petry, the former co-head of the far-right Alternative for Germany (AfD), was charged with perjury by prosecutors in Dresden on Wednesday.

Perjury carries a sentence of at least a year in jail, or six months in minor cases.

Petry is accused of lying under oath in November 2015 when she and fellow AfD member Carsten Hütter are alleged to have given conflicting testimony on the AfD's candidate list and campaign financing ahead of Saxony's 2014 state election.

The accusations relate to loans that AfD candidates in Saxony gave to the nationalist party in order to support its campaign in the eastern German state. The AfD was then accused of taking one candidate off its state list because he didn't want to give a loan to the party.

Petry, a lawmaker in the eastern state of Saxony's parliament, has maintained her innocence. In August, Saxony's parliament lifted Petry's immunity from prosecution — a move that was welcomed by Petry herself. She has said she wants a chance to set the record straight.

After joining the AfD in 2013, Petry quickly rose up the ranks to become one of the party's public face and assumed the role of co-leader in 2015. Last Friday, Petry made the surprise announcment that she was stepping down from her post as co-chair and officially left the AfD.

A few days prior, she announced that she would not represent the AfD in the Bundestag, despite winning a direct mandate on the AfD ticket.