Saxony's state parliament has lifted Frauke Petry's immunity. This clears the way for prosecutors to pursue charges against the AfD co-chair over allegations of lying under oath about campaign financing. 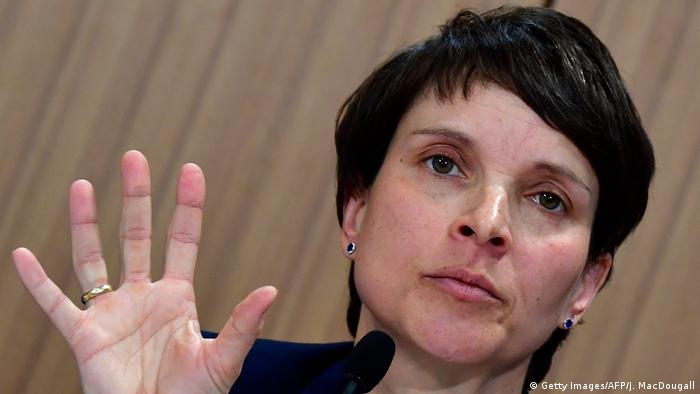 * Petry has maintained her innocence, but it marks another challenge for her and the AfD ahead of Germany's federal elections

The midnight deadline for lawmakers in Saxony to protest a parliamentary committee's recommendation to lift Petry's immunity from prosecution passed with none of them doing so.

"Nobody objected to it," parliamentary spokesperson Ivo Klatte said on Tuesday. The lawmakers had since August 17 to lodge an objection.

That clears the way for state prosecutors to press charges against Petry following a yearlong investigation into alleged perjury. A spokesman for the Dresden-based state prosecutor did not elaborate on whether or when charges may be laid.

Petry is suspected of lying under oath during an electoral oversight committee hearing in November 2015. She and the AfD's then-treasurer, Carsten Hütter, are alleged to have given conflicting testimony about the AfD's candidate list and campaign financing ahead of Saxony's 2014 state election.

The issue in question revolves around loans that the AfD had requested from its candidates in order to support its campaign in the eastern German state. The AfD was accused of taking one candidate off its party list because he refused to give the party a loan. Petry and Hütter gave differing accounts as to when Petry knew about the loans.

State prosecutors in Dresden made the application to lift Petry's immunity after Left party lawmaker Andre Schollbach filed a criminal complaint against Petry.

Who is Frauke Petry?

The 42-year-old with a PhD in chemistry joined the AfD in 2013 and quickly rose to become its public face. She led the party, which originated as a euroskeptic movement, in a more populist direction with a strong focus on opposing the government's welcoming stance toward refugees and other migrants.

But recently she has been caught up in infighting within the party, announcing she would not stand as its top candidate in Germany's upcoming federal elections.

What does the lifting of immunity mean for her and the AfD?

Being investigated for criminal charges could endanger Petry's political future. Having the perjury allegations hanging over her, especially in the midst of Germany's federal elections campaign, already appears to have damaged her standing within the AfD.

Though the party has stood by her until now, the AfD's top candidate, Alexander Gauland, has said that if a court allowed a prosecution to go ahead, they would have to rethink their position.

The AfD is polling at roughly 9 percent, enough to clear the 5-percent hurdle to enter the Bundestag for the first time.

At the August 17 hearing of the parliamentary committee, Petry herself welcomed the lifting of her immunity, saying it would give her a chance to present her side of the story in public.

What punishment would Petry face if found guilty?

Perjury carries a sentence of at least a year in jail, or six months in minor cases.

The head of the AfD party is being investigated over allegations she lied under oath to the Saxon state parliament. The case revolves around statements she gave concerning loans made to the party. (25.05.2016)

Leading AfD politician Alexander Gauland has landed in hot water again after saying a German minister should be "disposed of" in Turkey. The remark sparked further outcry when he refused to apologize. (29.08.2017)