Petry, ex-co-chair of the far-right AfD, plans to form a new grouping at regional and federal levels. Petry, who quit the party after its election upswing last week, also worked to distance herself from Islamophobia. 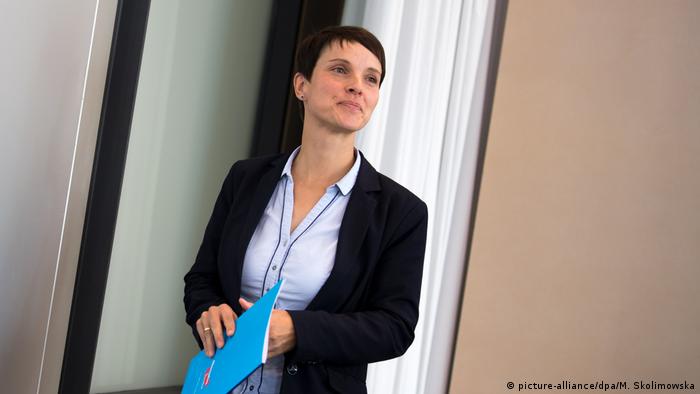 In an interview published in the Sunday newspaper Welt am Sonntag Frauke Petry said she plans to form a parliamentary grouping of other outgoing disgruntled Alternative for Germany (AfD) deputies in the Saxon state parliament and in the federal Bundestag, but added that she does not want "an exodus from the AfD" and does not want to break up the party.

Sunday's general elections saw the AfD enter the Bundestag legislature for the first time, winning 12.6 percent of the vote, giving it 90 seats and making it the third-largest party in Germany, an event that has evoked soul-searching within the ruling Christian Democrats (CDU), whose vote slipped to just over 30 percent on the back of disapproval of Chancellor Angela Merkel's immigration policy. Germany's other major party, the Social Democrats (SPD), also saw their worst result since World War II.

The AfD, meanwhile, is split between an older, more radical far-right group and a younger group around Petry, who alongside three regional MPs quit the party last week, prompting speculation she would set up a new party. Petry's husband, Marcus Pretzell, also left the party hours after Sunday's election.

Bernhard Wildt, the co-leader of the AfD in the eastern state of Mecklenburg Vorpommern, as well as fellow lawmakers Matthias Manthei and Christel Weissig, announced they would leave on Thursday, citing violent and right-wing extremist tendencies within the AfD.

The AfD manifesto in the recent Bundestag election, Petry said, posits a blanket rejection of Islam, adding that she would like to see a more balanced view of Islam and had no problems with Muslims living in Germany. "Their religious beliefs are totally private," she said. "I have no problem with Muslims who have left the political claims of Islam and thus have moved away from traditional Islam.

"Political Islam, on the other hand, is culturally incompatible with our society," Petry added.

Petry went on to complain about a "witch hunt" against her and colleagues in her former party.

An example of the intrigues she claimed had been directed against her was her opponents spreading a rumor that she had wanted to become the sole lead candidate in the election.

"In fact, party vice chairman Alexander Gauland wanted to become the top candidate from the outset," she said.

Meanwhile, there have been calls from within Chancellor Angela Merkel's Christian Democratic Union for the party to take a more conservative line to halt a rightward drift in the former East Germany.

But while such a move would quieten critics in the Christian Social Union, the slightly more conservative Bavarian sister party to Chancellor Angela Merkel's CDU, it could complicate the job Merkel faces putting together a coalition with the Greens and the pro-business Free Democrats (FDP).

The so-called "Jamaica coalition" became more likely on Saturday when the Greens voted at a special congress to start exploratory talks on a deal despite reservations about the other parties' harder-line immigration policies.

The Jamaica route became Merkel's only option when the SPD, the CDU's junior partner in the outgoing grand coalition, went into the opposition following a historically low election result of 20.5 percent.

A recent poll by broadcaster ZDF found that 59 percent of Germans are in favor of a partnership between Merkel's conservative bloc, the Greens and FDP.

Opinion: Sunny days are over for Angela Merkel

The outcome of the Bundestag election won't make federal policy any easier, and not just because of the AfD. Forming a government will probably be a lengthy task, says DW's Christoph Strack. (25.09.2017)

Alternative for Germany (AfD) co-chair Frauke Petry has said she'll leave the party — without specifying when. On Monday she announced she would not sit with the party's parliamentary group in the Bundestag. (27.09.2017)

Two breakaway members of Germany's right-wing AfD party seem set on forming a separate faction in the Bundestag parliament and even a new party. But a freshly elected AfD leader says the move is "doomed to failure." (27.09.2017)