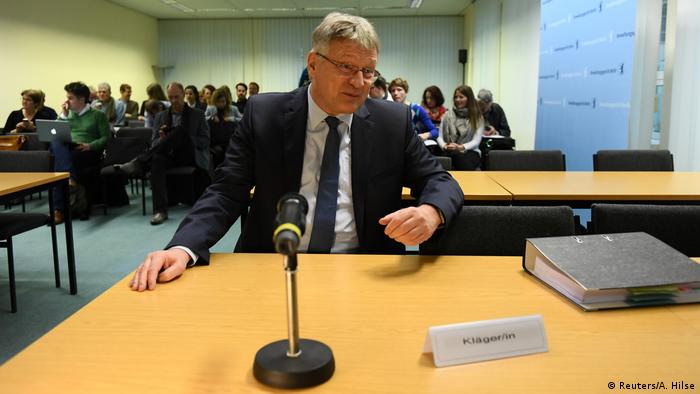 Germany's parliament, the Bundestag, slapped a €269,400 ($296,000) fine on the AfD over €89,800 worth of advertising from a Swiss public relations agency for Meuthen's 2016 state election campaign in the southern state of Baden-Württemberg. The fine equals three times the value of the promotional work.

The Bundestag had ruled that the free posters, flyers and newspaper ads produced by the Swiss firm, Goal AG, amounted to an illegal donation because the AfD failed to identify the source of the funding for the promotions.

German parties and candidates are not permitted to receive donations from non-EU entities, and before accepting the offer, Meuthen needed to make sure where the funding for the work had come from.

On Thursday, Meuthen said at the time he "never had the slightest reason to believe" that could he have acted unlawfully.

When Meuthen was asked if he had been aware of the ads and posters that Goal AG had produced on his behalf, he replied that he "hadn't noticed that much" and that the firm's chief, Alexander Segert, was a close friend who had simply done him a favor.

"Alexander made a few posters there, how nice of Alexander," Meuthen said he thought at the time, adding that the campaign had been run "casually" and was not "professionally organized."

Administrative court president Erna Xalter said that Meuthen's position at the time as the AfD's representative in Baden-Württemberg meant that he must have recognized that the support was illegal, adding that he simply could have asked his friend where the money for the campaign was coming from.

The AfD argued that the promotions were not donations to the party, because the posters were of Meuthen and therefore of a personal nature.

However, the court said that the posters clearly advocated the AfD as a whole and featured the party's logo and website address.

More Swiss trouble for the AfD

Two other AfD politicians are also facing potential fines for campaign contributions originating in Switzerland. Guido Reil, who currently represents the AfD in the European Parliament, also accepted pro-bono promotions from Goal AG during a campaign in 2017.

AfD leader Alice Weidel could also be fined around €396,000 for receiving nearly €130,000 in donations from a Swiss pharmacy concern. Weidel's constituency office returned the money several months after receiving it amid doubts about its legality.

According to the German press agency DPA, the AfD has allocated around €1 million to deal with its donation scandals.