Northern, central and eastern parts of Germany have been paralyzed by heavy snow with major disruption to transport as the working week begins. 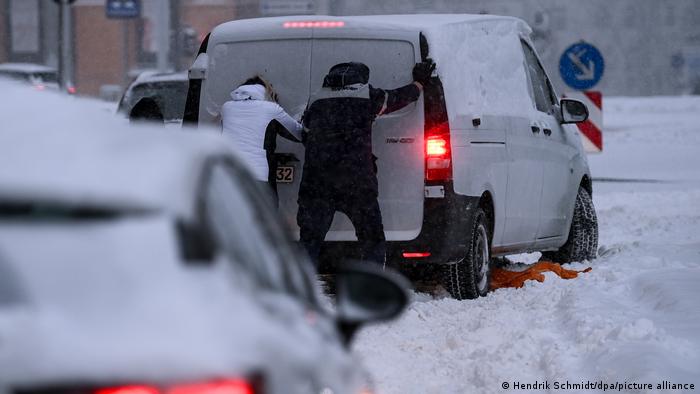 Rail and road traffic across swaths of Germany were disrupted on Monday as snow blanketed the country's transport network.

Winter weather also disrupted travel in Belgium, the Netherlands and the United Kingdom, with more snow predicted across much of northern Europe.

Police in the western state of North Rhine-Westphalia responded to some 720 calls within 24 hours after the extreme weather hit on Sunday.

According to the state control center, officers were called to 507 weather-related accidents from 6 a.m. on Sunday to 6 a.m. on Monday.

The accidents resulted in one fatality and 37 minor injuries. In Duisburg, a car had run off the road and landed in a stream, killing the driver.

Police in the city of Dortmund said they had been inundated with calls and pleaded for people to stay at home.

"Take advantage of home office and other possibilities not to add to the traffic," a police statement said.

Rail operator Deutsche Bahn canceled most connections from both cities in the direction of Hanover, Cologne, Frankfurt as well as Munich.

DW correspondent Jared Reed said that despite numerous cancellations, "luckily" there weren't too many stranded people in Hanover, a hub for regional and long-distance German trains.

DW correspondent Jared Reed said that despite numerous cancellations, "luckily" there weren't too many stranded people in Hanover, a hub for regional and long-distance German trains.

In the neighboring Netherlands, Dutch authorities declared a rare "code red" emergency as the country grappled with its first proper snowstorm in more than a decade.

There were delays or cancellations to dozens of flights at Amsterdam's Schiphol airport, while the southern city of Eindhoven's airport scrapped all services.

England was also expecting heavy snow from the weather system named "Storm Darcy" by meteorologists and dubbed by UK media as the "Beast from the East II." The first "Beast," in 2018, brought unusually low temperatures and heavy snowfallto large areas of Britain and Ireland.

The polar vortex is contributing to an icy winter in the Northern Hemisphere after all. Here's how the weather phenomenon comes about.

Following the popularity of the €9 blanket rail and bus ticket in the summer months, Germany's state and regional governments are trying to come up with a successor that's permanent and more affordable.