Germany were dominant from the first whistle and comfortably saw off the challenge of Belarus to qualify for EURO 2020. Matthias Ginter and Toni Kroos stole the show, but how did the rest of Joachim Löw’s charges fare? 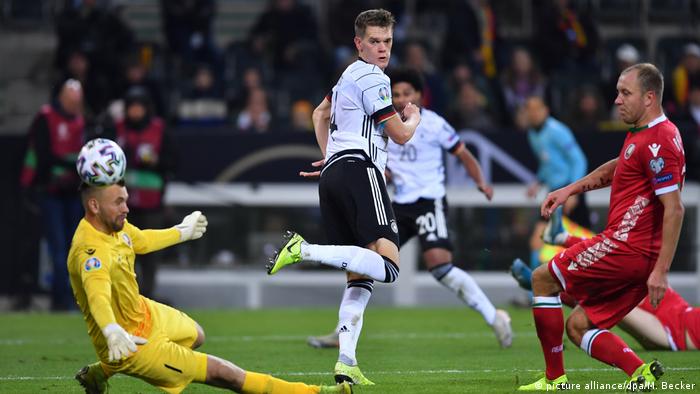 Manuel Neuer: As so often against deep-lying sides, Germany’s No1 had little to do, only making three saves all game. One was eye-catching to deny Kovalev, one was routine and the other prevented Stasevich from reducing the arrears from the penalty spot. 8

Lukas Klostermann: The 23-year-old had a lot of joy down the right wing, but despite regularly getting into dangerous areas, struggled to produce the all-important final pass. 5

Matthias Ginter: The football gods shone on Ginter in Mönchengladbach. On home turf, the centre-back let little get past him and scored a goal that would have made Lionel Messi blush. His dummy set up Germany’s second, while his square ball teed up Kroos for the third. 9

Robin Koch: Koch had acquitted himself well at the heart of Germany’s backline before getting wrong side of Nekhaychik and giving away a penalty with a clumsy challenge. Neuer spared his blushes, but not his rating. 4

Nico Schulz: The most impactful thing the Borussia Dortmund left-back did in the entire 90 minutes was to ring Kovalev’s bell by catching him with his shoulder in a mistimed challenge. His end product left a lot to be desired. 3

Joshua Kimmich: Bayern Munich’s midfield metronome was the quietest of Germany’s midfield three. No reason for criticism and no reason for jubilation. 6

Toni Kroos: The Real Madrid man monotonous backwards and sideways passing was actually punctuated with purpose and positivity. With two goals and an assist, it was the first time since the 7-1 win over Brazil that Kroos had had a hand in two goals in a single game. 9

Ilkay Gündogan: Some of his first touches were breathtaking. Some of his passes were spell-binding. There was scope for more than just one assist though. 7

Leon Goretzka: Germany’s second goal was a trademark effort from Goretzka as he swept home first time from a Kroos corner. The Bayern midfielder had chances to bag his 10th international goal, but will have been pleased with a successful return from injury. 7

Serge Gnabry: Despite providing the assist for Ginter’s opener, this will go down as one of Gnabry’s most disappointing performances in a Germany shirt. Then again he did set a ridiculously high bar by scoring six goals in his last six games on the international stage. 6

Timo Werner: A night to forget for Werner as he had nothing to show for the 68 minutes he spent on the pitch. 4

Julian Brandt: Came off the bench with just over 20 minutes left to play, but struggled to assert himself on a game that had already been put beyond reach. 5

Luca Waldschmidt came on in the 84th minute, but lasted less than five minutes as the result of a heavy collision with Belarus keeper Gutor. The Freiburg forward had to be replaced by Sebastian Rudy as a result.