After more than a decade of belt-tightening in the wake of the financial crisis, experts are demanding higher public spending on Germany's infrastructure. But although crumbling, a collapse is nowhere near in sight. 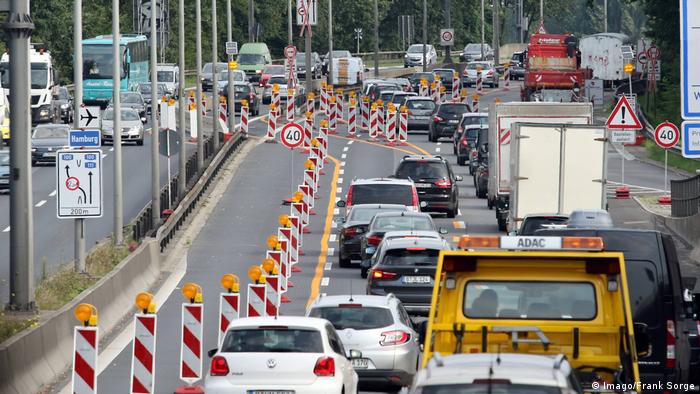 The spectacular collapse of a large stretch of a motorway bridge in Genoa, Italy on Tuesday has brought Italian infrastructure into the spotlight. Though the precise cause has not been confirmed, the bridge failed amid reports of heavy storms at the same time work to shore up the bridge's foundation was being carried out.

Unsurprisingly the tragedy has also redirected attention more broadly toward infrastructure in general. Prosperous Germany is often criticized for a lack of investment in its infrastructure, but making connections between the German situation and what occurred in Genoa is not necessarily advisable as there is no suggestion that German bridges are on the brink of mass collapse.

Authorities nonetheless have their eyes on a few of them, most notoriously the Rhine bridge at Leverkusen, just north of Cologne.

Traffic continues to flow from shore to shore, but trucks are not among those enjoying the view because they have been banned since 2012 after cracks were discovered. A replacement bridge is in the works and should be completed by 2024.

Despite complaints from truck drivers and a popular pessimistic view of roads, public transport and government buildings, Germany's road network is still ranked relatively high. The European Commission's Mobility and Transport division measures the quality of various types of infrastructure across the EU. From 2013 to 2017, Germany's road quality remained in 6th place. During the same time Italy improved and moved from 20th place up to 17th place. According to the report, the Netherlands, France, Portugal and Denmark have the best roads in Europe.

But bridges are not roads. They have a lot more fiddly parts and have to hold their own, not to mention increasing amounts of traffic, especially progressively more heavy freight traffic.

A recent article in German weekly Der Spiegel took a detailed look at German bridges. Using figures supplied by the Ministry of Transport, Building and Urban Development, the authors concluded that 12.4 percent of the country's bridges are in poor condition.

Overall, the former East German states have better regional infrastructure than in the west since huge sections of it were replaced after German unification in the 1990s and 2000s. Bridges in West Germany are on average much older and today still handle more traffic.

Although there is a large backlog of bridges to repair — not to mention streets, traffic signals and sidewalks — when looking at the country as a whole, German authorities are known to quickly err on the side of safety. Trucks are banned on a number of bridges and when a runway at Hanover airport cracked because of extreme heat two weeks ago, the airport was immediately closed and the necessary repairs done overnight.

Yet the critics are many and vocal. Like in many countries, responsibility for streets is in the hands of several different competing authorities: federal, state and local governments or a mix of all three. Finding those responsible or getting them to agree and pay can be quite difficult; even if approved in theory, complicated approval procedures for contractors are cumbersome and hinder projects.

Many have pointed out that Germany invests much less compared to other industrial countries when measured against gross domestic product (GDP), a fact that has only been acerbated by the country's phenomenal growth. And indeed after its post-unification investment boom in the 1990s investment in infrastructure has greatly declined, delaying important investments and big projects.

Even if all these problems were set aside and an infinite amount of money was put into the pot, all the problem areas couldn't be fixed at once. Heavy investment is key, but fixing infrastructure can only make gradual headway. There is a lack of engineers, construction workers and probably raw materials.

Drivers and residents would not put up with the endless construction, closures and traffic jams either. So before we make generalized and rash judgements about the state of Italian infrastructure we need more details. In real life, just like in politics, building bridges is much harder than tearing them down.

German economists have proposed an 'investment agenda,' calling for a massive boost in public spending on infrastructure and education, to boost the nation's productivity. They say it would more than pay for itself. (01.12.2017)