Magomed-Ali C. was arrested in August 2018 on suspicion of planning a bomb attack at a Berlin shopping center. He allegedly had close ties to the man who killed 11 people at a Christmas market in the capital in 2016. 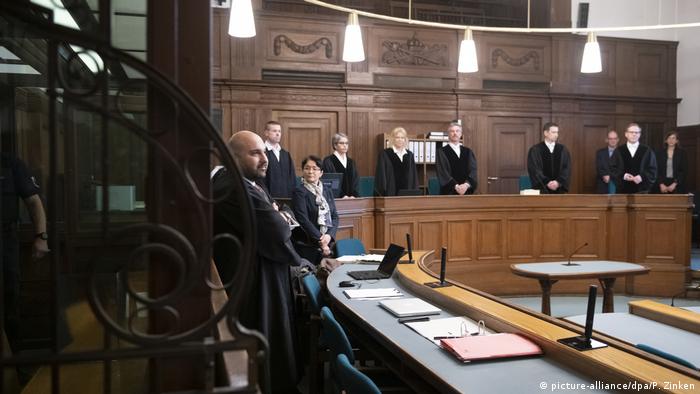 The trial of a 31-year-old Islamist from Russia who allegedly planned a bomb attack in Berlin began on Thursday.

Federal prosecutors accuse Magomed-Ali C. of planning the attack, most likely on a shopping center in the north of the capital, with an accomplice, Clement B.

Magomed-Ali C. allegedly stockpiled large amounts of the explosive known as TATP in his Berlin apartment and was planning to build an explosive charge before he was arrested in August 2018.

The attack would have "resulted in a climate of fear and insecurity," Chief Prosecutor Malte Merz said.

Planning began in mid-2015 and ended in October 2016 after both men became aware of police investigators closing in on their activity.

Anis Amri, the man who drove a truck into a crowded Christmas market in Berlin in 2016, was allegedly also involved in the planning's later stages.

Magomed-Ali C. moved to Germany from Dagestan in southern Russia as an asylum seeker in 2011 and later confessed his loyalty to the "Islamic State" terrorist group. He refused to speak as the trial opened.

"He will defend himself in silence," said his lawyer Tarig Elobied, who also said his client should be exonerated of the more serious charges owing to a lack of proof.

Magomed-Ali C. and Clement B. allegedly had links to a Belgian terror cell that included the men who carried out two terrorist attacks in Paris in 2015 and an attack in Brussels in 2016.

Clement B. was arrested in April 2017 in the southern French city of Marseille. He is expected to testify as a witness in Magomed-Ali's trial.