Germany is set to introduce a series of restrictions on the advertising of tobacco products in streets, at bus stops and in cinemas. It's the only EU state that still allows tobacco products being broadly advertised. 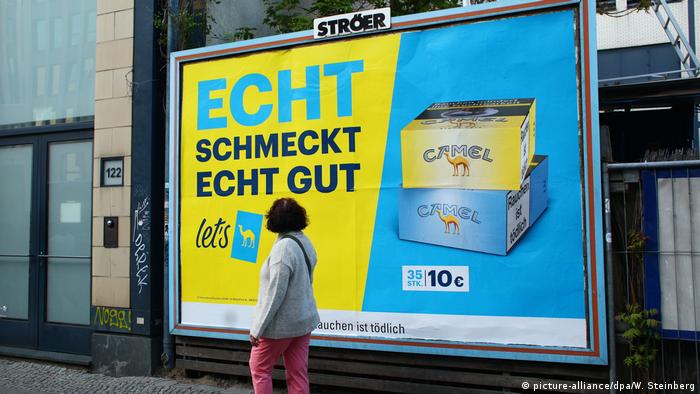 The German government announced it will limit the outdoor advertising of tobacco products from January 2022 after years of negotiations in the country's governing coalition.

Advertising of tobacco products will only be authorized in tobacco shops while, in cinemas, commercials for tobacco products may only be shown in films that are not aimed at under-18s. Distribution of free tobacco samples will also no longer be allowed outside of specialist stores.

"I am happy and grateful, that after a long delay, a comprehensive ban on tobacco advertising is about to be passed," Christian Social Union (CSU) politician and former Minister of Food and Agriculture Christian Schmidt told dpa news agency.

Federal Drug Commissioner Daniela Ludwig said that while the Bundesrat, Germany's upper house of parliament, still has to give the green light, "at last we're on the direct route to our goal with the tobacco advertising ban."

Physicians have long been demanding further restrictions on tobacco advertising. Although such advertising is outlawed in the media, Germany is the only European Union country that still allows companies to advertise tobacco products on street posters and in cinemas.

The Cabinet had pushed for a similar initiative in 2016 but was met with resistance from Chancellor Angela Merkel's CDU/CSU bloc. The coalition changed its position at the end of last year.

The tobacco industry spent an estimated €100 million ($112 million) a year on cinema and outdoor advertising in Germany. A part of the revenue also went to local authorities, for example for allowing poster advertising of tobacco products at bus stops.

"The advertising ban on tobacco products and e-cigarettes is a completely exaggerated interference of the state", FDP politican Frank Sitta told the AFP news agency. "If less harmful products can no longer be referred to, it proves to be counterproductive for health protection."

However, the German Children's Fund charity (Deutsches Kinderhilfswerk) said the ban did not go far enough. The Berlin-based charity called for a ban on the promotion of cigarettes by advertising ambassadors as well as banning tobacco manufacturers from sponsoring events.

"The UN Convention on the Rights of the Child must also be consistently enforced in the area of tobacco advertising ", said Holger Hofmann, director of the charity, adding that the tobacco industry must be regulated to such an extent that the welfare and rights of a child is not compromised.

According to the charity, countries with comprehensive advertising bans on tobacco have managed to lower levels of tobacco consumption.

I lit my last cigarette eight weeks ago. In this short amount time, not only have great things happened to my body, but also my psyche. What really goes on inside the human body after that last cigarette is butted out? (10.10.2019)