As Germany battles a fifth coronavirus wave, people took to the street to rail against COVID-19 restrictions and a possible vaccine mandate. Others marched for "solidarity instead of conspiracy theories." 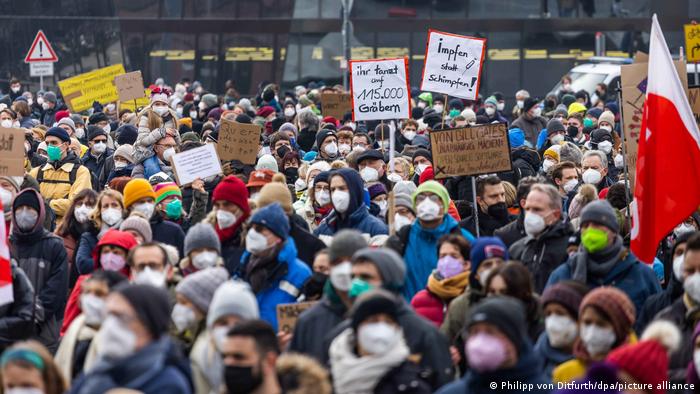 Signs reading, "Vaccinate instead of scold!" and, "You dance on 115,00 graves" were seen at a protest

Thousands of people across Germany gathered for coronavirus demonstrations on Saturday.

The protests in Germany came as the country hit a new record infection rate. The Robert Koch Institute for infectious diseases (RKI) recorded 497.1 new cases per 100,000 people in the past seven days. That's higher than the last reported peak of 485.1, recorded on November 29.

Similar protests also took place on Saturday in other European countries, including Italy, Austria and France, as governments move toward making vaccination against COVID-19 mandatory.

Italy recently tightened restrictions and introduced vaccine mandates for people over 50, Austria's parliament is due to vote on a vaccine mandate next week and French lawmakers are debating tighter rules for the unvaccinated.

Where were Germany's biggest protests?

According to the police, up to 7,000 demonstrators gathered in Düsseldorf to protest vaccine mandates. Police said the rally was largely peaceful.

In Hamburg, a protest against COVID-19 measures and vaccination saw a turnout of 3,000 people, police said. Officials banned that demonstration citing the danger of spreading the omicron variant. The organizers had filed an urgent appeal to reverse the ban, but an administrative court rejected it.

Most protesters were not wearing masks, and scuffles broke out, according to the police.

Separately, more than 2,900 people gathered in Hamburg for a protest against conspiracy theorists and those opposed to vaccination, according to German media. They rallied under the slogan: "Solidarity and enlightenment instead of conspiracy ideologies." 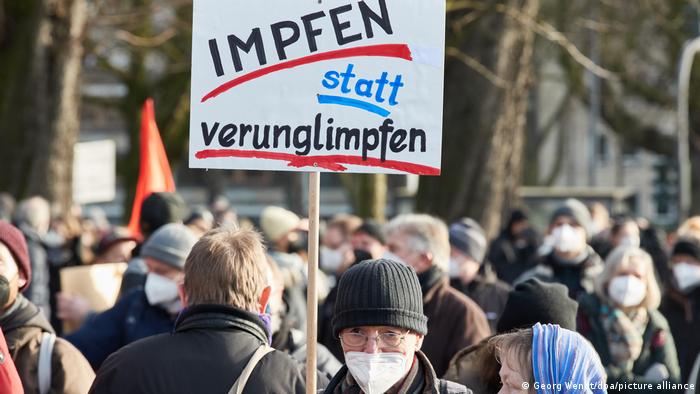 Participants at a Hamburg protest held banners reading: "Vaccinate rather than vilify!"

The city of Freiburg, in the southwestern state of Baden-Württemberg, also saw similar events.

About 2,500 people protested against conspiracies, police there said. At the same time, some 6,000 others rallied against coronavirus measures. 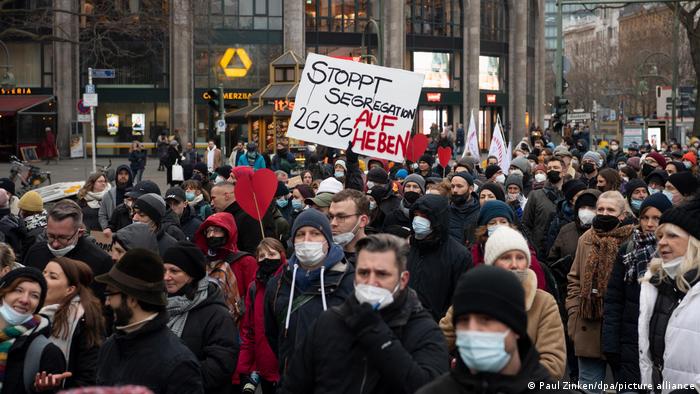 Amid the fifth wave, largely attributed to the spread of the omicron variant, the German government aimed to vaccinate 80% of the population by the end of January. Just over 70% of German adults have been fully vaccinated against the coronavirus. The estimate includes 45% having received a booster shot.

German Chancellor Olaf Scholz has recently advocated for a vaccine mandate for all adults during a speech in parliament.

Opinion polls show that most people in Germany back compulsory vaccination against COVID-19. But a vocal minority is opposed to the idea.

Health Minister Karl Lauterbach is also a strong supporter of vaccine mandates. He has repeatedly called for a combination of mandatory jabs and contact restrictions to curb the spread of the virus.

The latest coronavirus measures in Germany include restrictions on restaurants and bars. Customers need to provide a negative COVID-19 test or proof of a booster shot to enter venues.