Some 15,000 people packed into Bielefeld to protest against right-wing extremists. Protesters also criticized officials for allowing the neo-Nazi march to take place on the anniversary of the Nazis' anti-Jewish pogroms. 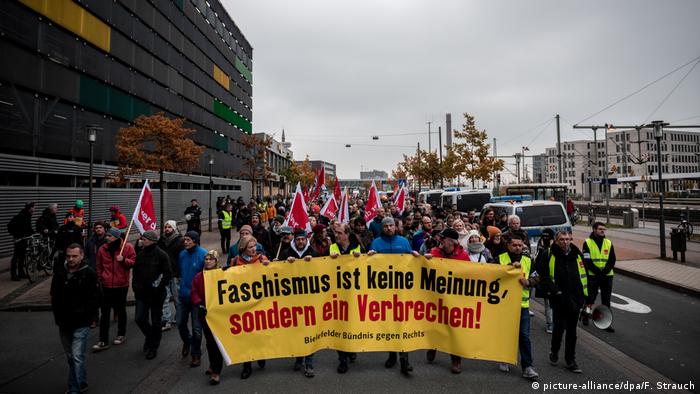 Thousands of people crowded the streets of the western German city of Bielefeld on Saturday to take part in a counterprotest against a neo-Nazi demonstration.

Officials estimated that over 10,000 people took part in the counterprotest, organized by Bielefeld's "Alliance against the right" and which took place under the motto: "Fascism is not an opinion, it's a crime."

Some 230 people took part in the neo-Nazi march, which was organized by the extremist The Right ("Die Rechte") party, to call for the release of Ursula Haverbeck, a 91-year-old Holocaust denier who has been sentenced several times.

The neo-Nazi demonstration sparked further anger from counterprotesters, as it took place on the 81st anniversary of Kristallnacht or the Night of Broken Glass, when Nazi Germany launched an anti-Jewish pogrom. 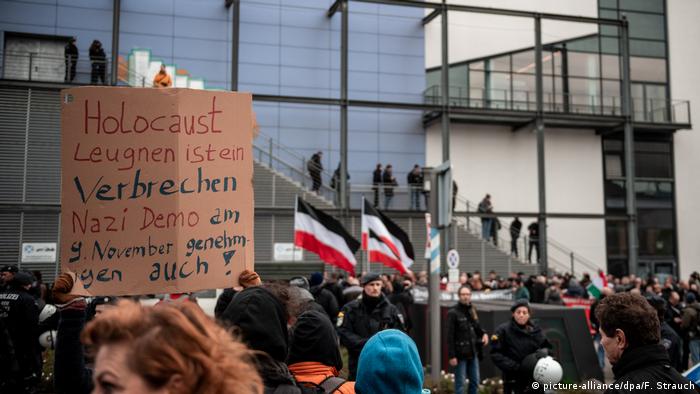 "Holocaust denial is a crime. Approving a Nazi demonstration on November 9 is, too!" wrote one counterprotester.

The event, which took place from November 9 to 10 in 1938, was the start of the systematic mass murder of European Jews in the Holocaust.

Counterprotesters harshly criticized officials for granting the neo-Nazi group permission to demonstrate on the anniversary.

Demonstrators formed a human chain around Bielefeld's synagogue and held a vigil there while the right-wing extremist protesters marched through the city.

Andrew Kuper, the president of the state parliament of North Rhine-Westphalia, said that the counterprotesters understood that November 9 is a day in Germany where "our entire nation remembers the crimes of the Nazis, shocked and ashamed." 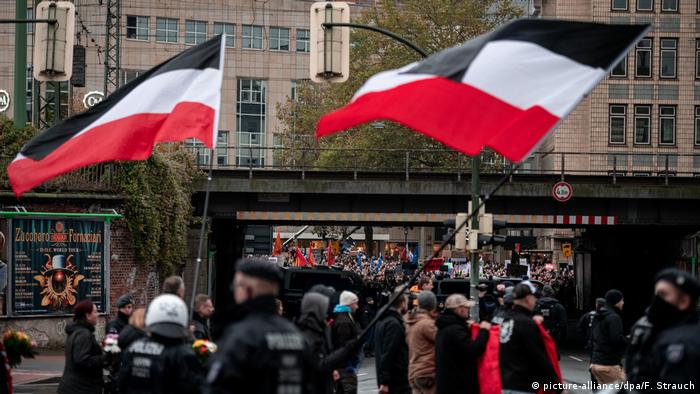 Over 1,000 police officers were present to keep the neo-Nazi protesters and counterdemonstrators separated

"That's why we are standing on the side of our fellow Jewish citizens — and not on the side of those who think perhaps that the crimes of the Nazis are a 'speck of bird shit' or who would completely deny them," Kuper said.

The far-right Alternative for Germany (AfD) party has come under fire over remarks about the Holocaust, including from AfD co-leader Alexander Gauland, who dismissed Adolf Hitler and the Nazis' rule as "bird shit in 1,000 years of successful German history."

The march also comes after a gunman killed two people after trying to force his way into a synagogue in the eastern German city of Halle in early October.

Memorials to honor the victims of the anti-Jewish pogroms are taking place across Germany, while the country also celebrates the 30th anniversary of the fall of the Berlin Wall, which took place on November 9, 1989.