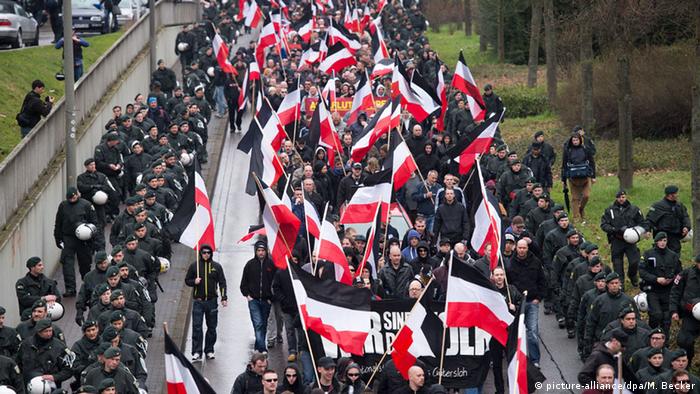 While the Dortmund-based neo-Nazi group "die Rechte" or "the Right" is not Germany's largest group of right-wing extremists, they just might be the best at getting the media's attention.

Last week they made the rounds on social media for a YouTube video in which they "patrol" a "gay cruising area" (a lonely-looking parking lot). The group is highly active, or at least good at making it look that way.

But they are always careful to stay just inside the gray zone of legality - and can count on particularly good legal counsel from within their ranks.

This is how so far they have managed to remain a recognized political party, unlike their predecessor organization NWDO ("National Resistance Dortmund"), which was banned in 2012. The symbols and actions they use may be close to the Nazi counterparts, which are banned in Germany, but they never quite cross the line. 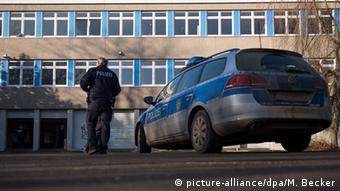 "They do something once, shoot photos, put it online, done," Birgit Miemitz of Dortmund's Coordination Center for Tolerance, Diversity, and Democracy told DW. Her office is often frustrated by the amount of attention given to these so-called "patrols" conducted by "die Rechte." For example, in the recent "gay cruising" YouTube video, or when they post picture of themselves claiming to help the elderly or kick drunks off of subway trains.

Their attention-grabbing activities do not end with their social media campaigns, however. Earlier this year they led a series of weekly protests against the city for housing Syrian refugees, and terrorized the refugees' own protest camp. They managed to cause such security concerns at a political debate planned by local broadcaster WDR that the company had to shut down the live event and ask everyone to submit their questions via email.

They were also barred from entering an election night event in May 2014 when, trying to celebrate a member of their party being voted to city council, they attempted to march in Nazi formation into the town hall. A few months later, they petitioned that same council for a list of all the city's Jewish citizens. 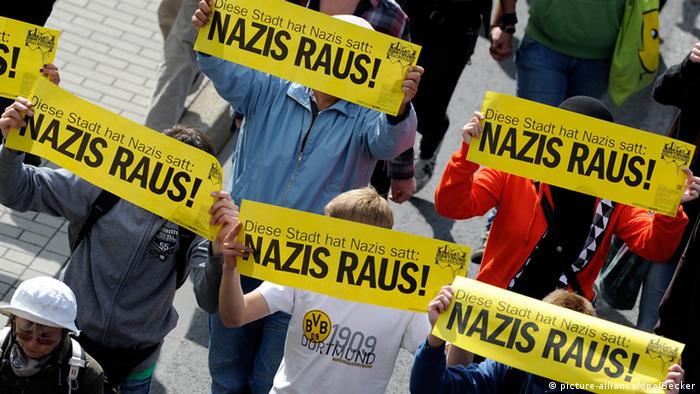 On their website, "die Rechte" have made their political positions very clear - they want the local refugee homes dismantled, to stop what they call the "foreign infiltration" of Dortmund, to end the "promotion of homosexuality" and so on. Some of their allusions to the Nazi party are subtle, such as the list of 25 party points, the same number as the National Socialists when they came to power in the 1930s, as Birgit Miemitz pointed out. Others are less so: like their T-shirts proclaiming them "Stadtschutz" ("City Protection") or, shortened, SS - evoking memories of the Nazi paramilitary organization.

"They are playing SS, to put it bluntly," Miemitz told DW.

Trying to gain a foothold in the west

Local journalist Felix Huesmann lays some of the blame for their success in Dortmund on the "lack of resistance against them from civil society, politicians and the police for quite a few years" when they began to take hold in the 1980s by using games of the local soccer team, BVB Dortmund, to recruit new members. 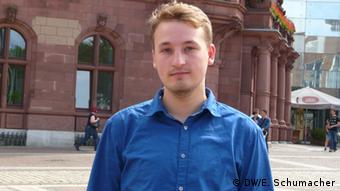 "They get to know your face, they do some research, they know who you are," says Huesmann, who was threatened by one of the neo-Nazis last year

Since the factory work in the Ruhr valley, where Dortmund is located, has been drying up since the 1970s and 80s, neo-Nazi groups have managed to feed off some of the discontent to spread their message.

Groups like the NPD, the country's biggest neo-Nazi party, and populist groups like pro-NRW (Pro-North Rhine Westphalia) and pro-Köln (Pro-Cologne) have also been trying to infiltrate what was west Germany for decades and expand their influence from their strongholds in the former east.

While far-right parties have not been as successful in other western German cities as they have in Dortmund, nearby Cologne did see a hundreds-strong "Hooligans against Salafists" right-wing demonstration last year.

Clamping down on extremism

The massive influx of refugees into Germany has also provided fertile new ground for "die Rechte" to recruit new members. Huesmann described to DW how in recent months, the right-wing group has gone to neighborhoods where homes are being built for asylum seekers, protesting their construction and trying to win sympathy with the locals. It was partially this - and a grassroots campaign focusing on well-known former soccer hooligan and local neo-Nazi Siegfried Borchardt, also known as "SS-Siggi" - that got "die Rechte" their seat on the city council.

Borchardt has since been replaced twice over by other members of "die Rechte," most recently by University of Bochum law student Michael Brück. 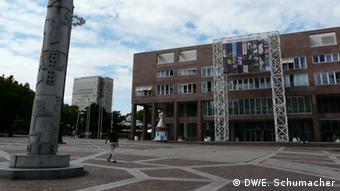 Although they might be a relatively small group, Miemitz warns that the public should not discount their power to do harm. "They are violent, it's not just the NSU," she said, referring to the right-wing extremist group allegedly responsible for the murders of nine immigrants and one police officer between 2000 and 2007.

While the NSU was committing its crime spree, the influence of right-wing extremism was largely downplayed the German authorities, who blamed the murders on the Turkish mafia. But now, local and state governments have turned extra-vigilant to the threat of neo-Nazi groups.

The void left on the right

Nowadays, Dortmund has inserted its anti-Nazi campaign into nearly every crevice where "die Rechte" might take hold. Miemitz was especially proud of a recent coup in which the city was able to purchase a building "die Rechte" had been using for their meetings and turn it into a multicultural youth center.

The danger presented to the German political landscape - as the mainstream conservative party, Chancellor Angela Merkel's Christian Democratic Union (CDU), moves to the center and leaves a void at the right - was clear to both Miemitz and Huesmann.

"Groups left of the center fail to offer good solutions to problems like the possible threat of Islamist terrorism…for a long time, only far-right and racist groups were talking about it. So if you leave it up to racists, they can take advantage of people who are afraid," Huesmann said.

Miemitz, however, was firm in the position that groups like "die Rechte" have no place in the political debate, because "they are clearly hostile towards the democratic process."

"Die Rechte" did not respond to Deutsche Welle's request for an interview or comment.

Nauen refugee shelter fire 'an attack on everyone'

It may have joined the list of German towns to witness violence aimed at refugees. This time, though, the suspected arson of a sports hall is being felt as an attack on the whole community. Ben Knight reports from Nauen. (25.08.2015)