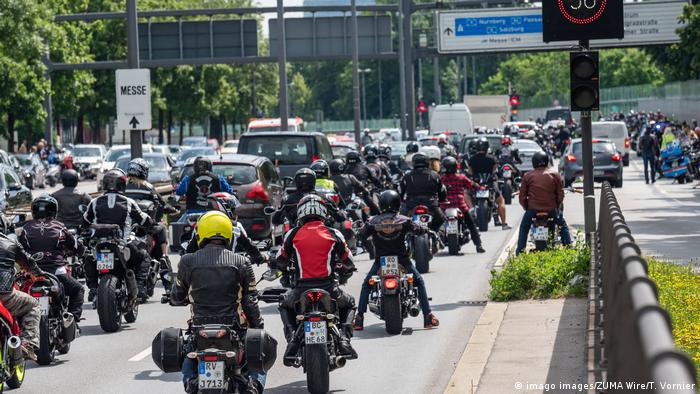 Thousands of motorcyclists have gathered across Germany to demonstrate against a possible driving ban on Sundays and public holidays currently under discussion.

Organizers say around 5,000 motorcyclists attended a protest in Friedrichshafen on Lake Constance, after expecting only 1,000. In Stuttgart some 8,000 were in attendance, German news agency DPA recorded.

Hamburg's infamous St Pauli and Reeperbahn district saw around 750 bikers block the road, broadcaster NDR reported, while over 1,000 bikers in Schwerin on the Baltic Sea gathered.

In Munich, the protest was technically illegal, as bans on large gatherings are still in place in the state of Bavaria, but police say over 6,000 bikes rode together along a major road in the late morning.

The nationwide protests were organized by the group "Bikers for Freedom."

Born to be wild

Born to be wild

What is the proposed motorcycle ban?

In May, several federal states publicly announced a proposed plan to limit the amount of noise created by motorcycles.

The noise ban would see noise pollution reduced to the equivalent of a passing truck or a lawnmower.

The federal council, which decides on federal law in Germany, will also consider a partial ban on using motorcycles on Sundays and public holidays.

Traditionally in Germany, these days are "rest days" where loud noise in residential areas is banned or frowned upon.

Motorcycle advocates, including the transport policy spokesman of the pro-business FDP party, say that such a ban is not necessary.

"Instead of prosecuting a few black sheep in the motorcycle community, these tighter controls would put us all under suspicion," Oliver Lukisc said.

Federal officials will consider the proposals in the coming weeks, but federal Transport Minister Andreas Scheuer has already voiced his opposition to the plan.

German court: Sikhs have to wear helmets on motorbikes

Wearing a helmet does not infringe on Sikhs' freedom of worship, a top German court has ruled. It argued that the measure protects the motorcyclist as well as other drivers and must therefore be enforced. (04.07.2019)

German police are investigating after video footage circulated showing a Hitler impersonator riding in a sidecar at a biker festival. A police officer seen in the video could also face consequences. (14.01.2020)