Berlin has signed a deal that will lead to further integration of German naval forces with the Dutch military. The move is being hailed as an important step in the creation of united European armed forces. 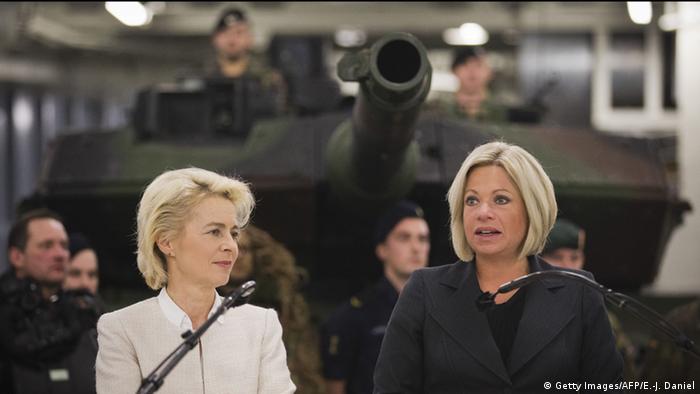 German Defense Minister Ursula von der Leyen on Thursday confirmed an agreement that will see some 800 German soldiers integrated into the Dutch navy.

While in Amsterdam, where she met with the Dutch Defense Minister, Jeanine Hennis-Plasschaert, von der Leyen called the plan a "prime example for the building of a European defense union."

In exchange for the German battalion, which will be subordinate to the Dutch navy until 2018 and includes mine detectors, reconnaissance and commando units, Berlin will share the use of an ultramodern Dutch supply ship.

"This cooperation shows the extraordinary depth of the partnership with the Netherlands, above all their great and mutual trust," von der Leyen said.

Germany and the Netherlands have been making strides to integrate their militaries since 1995. Plans for a fully integrated European army, however, remained stalled.

Ombudsman: German army is 'short of almost everything'

Germany's defense forces are stretched to the limit, military ombudsman Hans-Peter Bartels told lawmakers, calling for an urgent change in policy. The army currently has fewer personnel than at any time in its history. (26.01.2016)

German defense minister in Turkey: Differences in fight against 'IS'

The German army has been flying reconnaissance missions over Syria and Iraq for the anti-"IS" coalition. The defense minister has lauded Germany's role, despite open questions, reports DW's Udo Bauer from Incirlik. (21.01.2016)

Germany's defense minister has backed the deployment of tornado jets in Syria, saying it will help target "IS" and reduce refugee influx. Her visit comes soon after a suicide bomber killed 10 German tourists in Istanbul. (21.01.2016)