On Germany's national ESC qualification night, the singer Andreas Kümmert was the top choice for millions of viewers. Yet he did something completely unexpected: he turned down his win. The whole country is stunned. 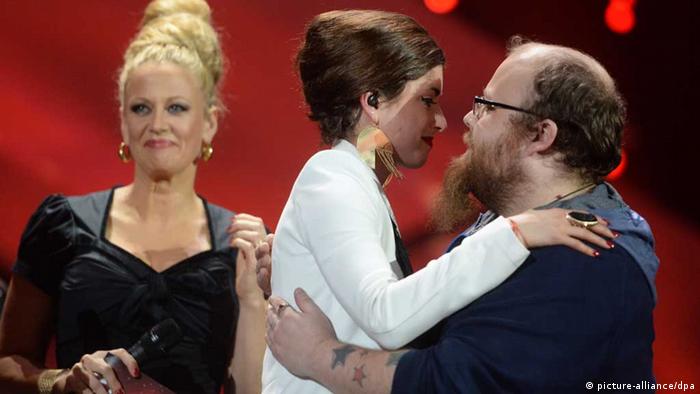 Eight contestants sang during the live televized event on Thursday night (05.05.2015) to determine who would represent Germany for this year's Eurovision Song Contest (ESC) finale, to be held in Vienna on May 23.

Despite having a high fever that night, 28-year-old Andreas Kümmert performed stunningly well, conquering the audience with his soulful voice.

Millions of viewers voted for him by telephone and SMS, and he was declared winner. But then, in an unexpected move, Kümmert declined his victory: "I am not in the condition to accept this vote. I'm just a minor musician." The audience, having earlier given him a standing ovation, booed.

Hosting the show, Barbara Schöneberger first dropped her jaw and then tried to convince the singer to change his mind. Summing up the evening, she said later: "This is one of the worse cases of coitus interruptus."

But Kümmert was determined to give up his highly coveted spot to runner-up Ann Sophie, who started crying when she found out she would represent Germany in Vienna. The 24-year-old's brilliant performance skills allowed her to leap-frog the long candidate selection process, as she won the "wildcard round" two weeks ago. 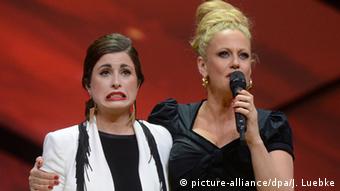 The winner-by-default described Kümmert's unprecedented action as "mega-brave." "He listened to his heart," she commented after the show, adding that journalists should respect his decision and leave him alone.

Universal, Kümmert's recording label, would have the best reasons to be upset. Yet producer Siggi Schuller also respectfully commented Kümmert's decision. "He gave his all and at some point realized that he simply couldn't cope with it," he told ARD in an interview.

German broadcasters were completely stunned by Kümmert's withdrawal. "We sat there with our mouths open," said the German public broadcasting network's entertainment coordinator Thomas Schreiber. The 3.2 million viewers who watched the show that night are certain to have been equally bewildered.

The European Broadcasting Union, organizer of the annual Eurovision Song Contest, whose finale has a television audience of 180 million, said the switch of candidates wouldn't affect Germany's participation in the song contest.

If everyone was initially left speechless that evening, reactions poured forth the following day, with the entire nation discussing the matter. Millions of fans who voted for Andreas Kümmert are severely disappointed. In the swirl of comments circulating on Twitter, Irish singer Rea Garvey's tweet deemed the whole situation a "disaster" and jokingly suggested sending TV show host Barbara Schöneberger to the finale instead.

In a comment to the German Press Agency (dpa), Germany's 2004 ESC contestant Max Mutzke said: "I can understand his decision, because the pressure behind the scenes is enormous," adding that he was personally "way too curious" to give up such an opportunity when his chance came.

70-year-old German soul singer Joy Fleming, who competed at the 1975 ESC (then called the Grand Prix Eurovision De La Chanson Européenne) also reacted to Kümmert's withdrawal, saying she was disappointed because she felt his performance was wonderful. She speculated: "Maybe he didn't feel at ease with all the styled people running around there. It was probably just too much for him," referring to the singer's unglamorous look for a pop star. 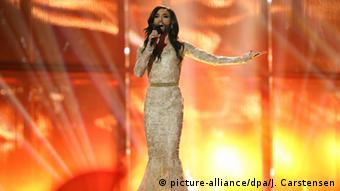 The corpulent and balding singer has nonetheless already experienced the glamor of show business. After winning the casting show "The Voice of Germany" in 2013, his single rocketed to second place in the charts.

The winner of the chance to represent Germany at this year's Eurovision has declined the opportunity to do so. On live television, Andreas Kümmert gave up his spot for runner-up Ann Sophie. (05.03.2015)

Ok, we all know about the wind machines and the glitter. But here are 10 things about the ultra kitschy Eurovision Song Contest that might surprise you. (05.03.2015)

Austrian singer and drag artist Conchita Wurst has launched her autobiography and new single in the German capital. The book, "My story" recounts the discrimination faced by the singer on her road to worldwide stardom. (03.03.2015)