Ok, we all know about the ostentatious wind machines and the glitter. But here are 10 things about the Eurovision Song Contest that might surprise you, in the titillating lead-up to Saturday's oh-so-fabulous finale. 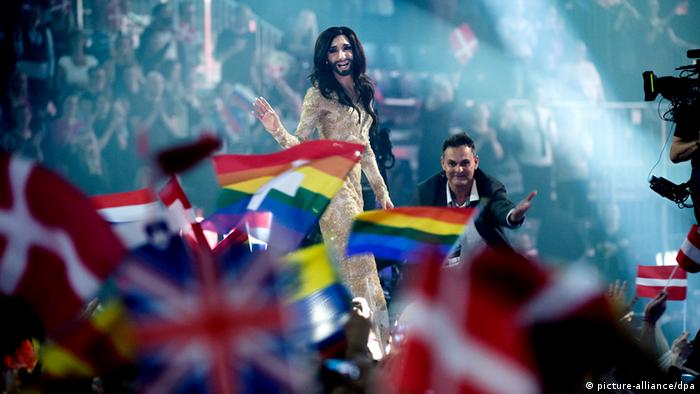 There is no Conchita 'Wurst'

Eurovision has produced a number of stars, some of which have become famous - or infamous - all over the world. Conchita Wurst, who was born as Tom Neuwirth, is one of them. The drag queen with the full beard claimed the ESC crown in 2014 and was quick to catch the attention of the press and followers of kitsch everywhere. But one of the photos to hit the web after her win was of a sausage resembling the singer. Wurst, of course, means sausage in German. Fans were quickly disappointed, however, since the delicacy was not available for purchase: Nuremberg-based comedian Bembers had just had a little fun with Photoshop. So, while the singer is very real, her sausage (and maybe a few other things) is not.

A slice of Conchita Wurst, anyone?

The most colorful costume wins (sometimes)

Whether or not real money is involved, it's not enough to just root for a particular song - you have to bet on it. Who's got the best chances? The ones with the most colorful outfits - at least according to the voices on the Internet.

But white has also proven to be a pretty successful (non-)color over the years. Denmark's winner Emmelie de Forest was dressed as a white elf in 2013 and Dima Bilan was a snow prince in 2008.

Those wanting to compile serious statistics on outfit colors can only start counting in 1968. That year's event held in London was the first ESC show to be broadcast in color.

Admittedly, many of the Eurovision participants look like they come from another world - if not planet. But everyone's no-holds-barred creativity has to adhere to strict ESC rules. One of them is: No animals allowed. That, however, didn't stop Ireland from sending a bird into the ring.

"Dustin the Turkey," a popular hand puppet known in its Celtic homeland for satire performances, made an appearance at the 2008 ESC in a shopping cart. Um, some inside jokes are best kept on the inside. Ireland may be the contest's most frequently crowned winner - but the turkey didn't even make it to the finals. 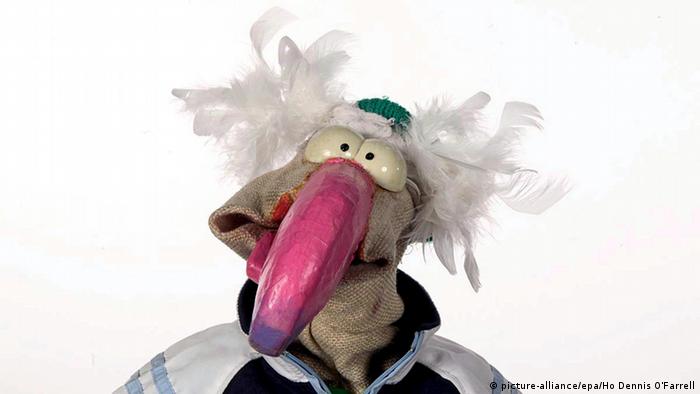 It's all about the text

While ESC is multiculti to the core, participants aren't required to sing in their native language. Many sing in English to improve their chances of being understood by those who are actually eligible to vote for them. Others, however, just sing random syllables so that everyone has an equal chance at understanding, regardless of their ethnic background. "Boom Bang-a-bang" was England's winning title in 1969, while Israel took home the 1978 trophy with "A-Ba-Ni-Bi."

Some artists try their luck with texts that practically anyone and their dog can sing along with. That doesn't always work out well: "Opera," a song whose refrain consisted only of the word "opera" repeated over and over again, only reached 19th place in 1983. However, Spain took gold in 1968 with the hum-along tune "La, la, la." For anyone who's wondering: "La" can be heard a total of 138 times in the ditty, but that doesn't qualify it as a tongue twister.

When international acts perform live in front of millions of spectators all over the world, it's not only a big moment for the individuals with the mics and in-ear monitors. It's also a dream for any streaker. Practically every year, someone manages to slip past security and set foot - at least one - on stage. Unfortunately, those who do realize such a feat never really get noticed because - even if they don't get blown away by the wind machines - it's not easy to be conspicuous among the outrageous costumes.

In 2010 in Oslo, Jimmy Jump from Spain enjoyed a few seconds on camera, but the dancers didn't even blink an eye. They just carried on with their performance as security lugged Jimmy Jump away. 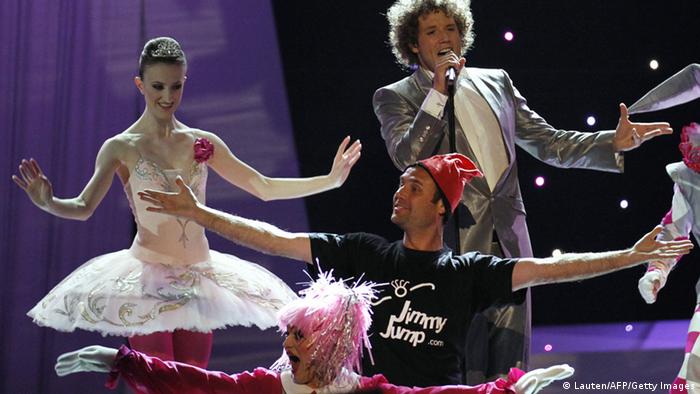 What's wrong with this picture?

Across Europe (as loosely defined by the ESC), people come together with family and friends to watch the finals in good company. Why not make the event a bit more interactive with some Eurovision Song Contest Bingo? Don't worry, you can keep sipping your Bellini and don't even have to turn your brain on because instructions can be found online. There you'll come across ready-to-print bingo cards with categories such as "tears of joy fall on stage," "ABBA is mentioned for the 12th time," or "there's a 'staircase' incident..." The winner gets to photoshop a YouTube video of this year's victor.

If you were swept off your feet by Germany's sugar-sweet hippy Nicole in 1982, you were likely among those traumatized by the Finnish winners in 2006. The monster-faced heavy metal group Lordi shouted out their "Hard Rock Hallelujah" - and proved that more than a few viewers were sick and tired of cute and nice. But how many of the thousands of people who voted for them would actually like to meet one of the monster men in a dark alley? 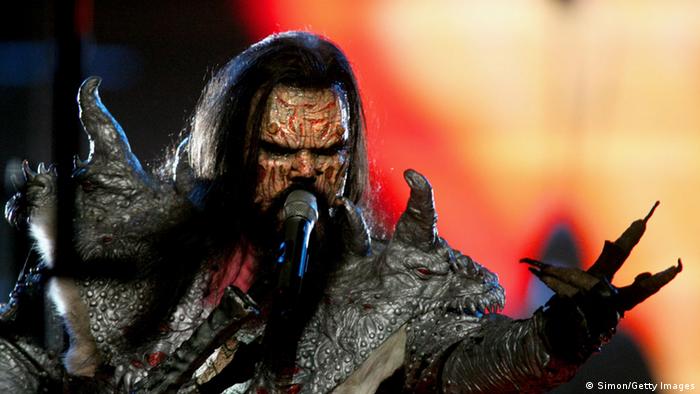 Who said kitsch had to be cute? Finland's Lori won in 2006

We are Europe (sort of)

Eurovision Song Contest sounds European, but it's not really. All of the countries that are active members of the European Broadcasting Union may participate. And that also includes Israel. There are, by the way, quite a few countries which have the right to join in the party, but have never sent a contestant: Algeria, Tunisia, Libya, Egypt, Jordan, Lebanon, and even Vatican City.

The 2015 contest, though, is set to welcome an honorary participant: Australia. The show has been broadcast Down Under since 1974 and collected myriad fans along the way. This year marks the 60th Song Contest and Australia's presence is the icing on the birthday cake.

The Eurovision Song Contest has been a springboard for a number of stars over the years. ABBA, which won the 1974 event in Brighton, is of course the first to come to mind. Udo Jürgens, who passed away last December, represented Austria three times before finally taking first place in 1966 with "Merci Chérie." Céline Dion also made an ESC appearance. Though she is Canadian, she claimed the top prize for Switzerland in 1988 with "Ne partez pas sans moi." No Titanics were sunk in the making of that win. 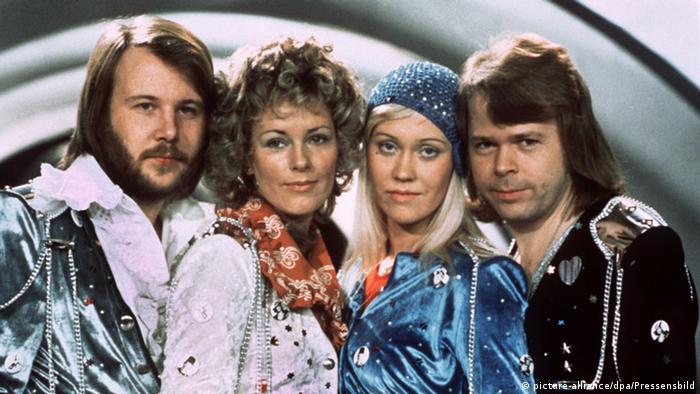 ABBA is ESC's most famous offspring

After ESC is before ESC

The winner is crowned, the television cameras are turned off, and ESC viewers fall into an alcohol-induced half-sleep, but don't be fooled: Eurovision is far from over. Fans get together all year to talk about their favorite musicians - and who could pass up a chance to dress up like the stars?

Germany's Eurovision Club, for example, holds several get-togethers a year, where some 300 fans from various countries reminisce over the last ESC, get ready for the next one, and trade CDs. And if they're lucky, one of the former title holders might just make a special appearance.

Seven acts will compete to represent Germany at the 2015 Eurovision Song Contest. The national finals will take place on March 5 in Hanover. An eighth contender will be selected at a club concert. (14.01.2015)