Last week, German Chancellor Angela Merkel called the Turkish offensive in the Syrian enclave "unacceptable." But that has not stopped her government from selling arms to Turkey, German public media reported. 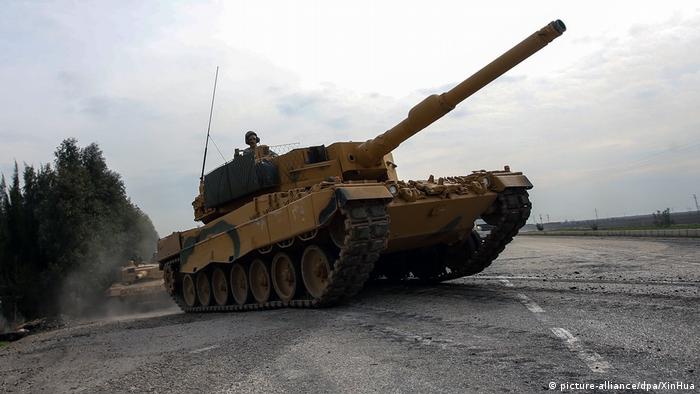 Germany continues to authorize the export of weapons to Turkey despite criticizing the country's offensive in the Syrian enclave of Afrin, German public broadcaster ARD reported Thursday.

The German government has approved the export of military equipment worth €4.4 million ($5.4 million) since January 20, when Turkey launched its offensive against Kurdish militia in Afrin, ARD said, citing a response from the Foreign Ministry to a question by the Left party.

The value of the approvals in the month preceding the offensive was almost €10 million.

Left party lawmaker Sevim Dagdelen, who has been a prominent critic of German arms exports to Turkey in the past, said the recent approvals had raised questions about Chancellor Angela Merkel's credibility after she denounced the invasion as "unacceptable."

"The criticism does not have any consequences," he told ARD, adding that rather than taking action to stop the fighting, Merkel's government authorized more weapons sales.

"Despite all justified security interests of Turkey, it's unacceptable what's happening in Afrin, where thousands and thousands of civilians are being pursued, are dying or have to flee," Merkel told German lawmakers.

Social Democrat (SPD) Deputy Parliamentary Leader Rolf Mützenich said one could not rule out that Turkey would use some of the weapons bought from Germany in the ongoing offensive in Syria.

"NATO countries like Turkey have more open delivery options, but they can also be denied, and in this case, that would be appropriate," he told the German broadcaster.

Turkey says it has taken "complete control" of Afrin after a ground and air offensive against the YPG that controlled the Syrian enclave. Ankara considers the YPG a terror group and an extension of the banned Kurdistan Workers' Party (PKK) rebels, which is waging an insurgency within its own borders.

Read more: With Turkey’s offensive into Afrin, Erdogan is seeking to kill two birds with one stone

Germany's government agreed to push back the decision on upgrading German-built tanks used by the Turkish army, according to the magazine Spiegel. The freeze follows uproar over Turkey's use of Leopard tanks in Syria. (25.01.2018)