Germany has reportedly launched an investigation against Adil Oksuz, one of the alleged masterminds behind the failed 2016 coup attempt in Turkey. It comes amid reports that Berlin is seeking to normalize relations. 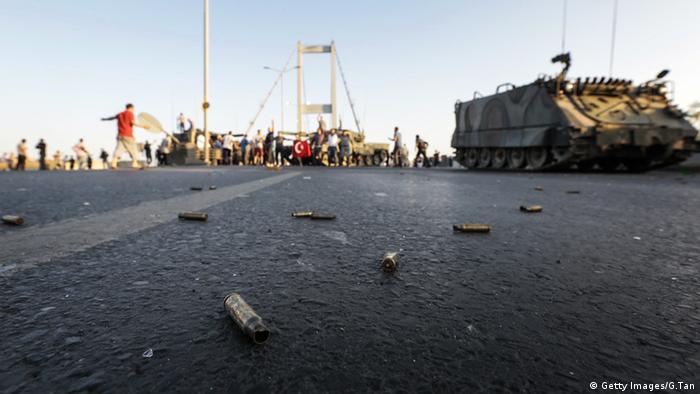 Police in Germany have reportedly launched an investigation to track down Adil Oksuz, one of Turkey's most wanted fugitives for his alleged role in the botched July 2016 coup attempt.

Oksuz is subject to what authorities have described as a "residency investigation," according to German broadcasters WDR and NDR, as well as German daily Süddeutscher Zeitung.

The Turkish national, a theology academic, is accused of being a follower of US-based cleric Fethullah Gulen, who Ankara says was behind last year's failed coup attempt.

Since last summer, Turkey has claimed that Oksuz lives in exile in Germany and demanded that he be extradited.

According to Turkish media, Oksuz has been seen in the German cities of Frankfurt and Ulm, and was granted a temporary residence permit in the southwestern state of Baden-Württemberg.

However, Berlin said it had no evidence that Oksuz ever filed an asylum application, at least not under his real name. It therefore has no way of ascertaining that he is actually in Germany.

Last month, German Foreign Minister Sigmar Gabriel told his Turkish counterpart Mevlut Cavusoglu that, even if Oksuz was living in Germany, authorities would not launch an investigation before Ankara presented unequivocal proof of his involvement in the attempted putsch.

However, Wednesday's reports suggested Turkey had passed on sufficient proof of his involvement to prompt Berlin to launch an a formal probe.

It remained unclear why the German government has agreed to cooperate with Turkish authorities in this particular instance. Berlin has repeatedly refused multiple demands from Turkish President Recep Tayyip Erdogan to deport other coup suspects who had been granted asylum in Germany, including NATO personnel and civil servants.

That prompted Erdogan to repeatedly accuse the German government last year of harboring terrorists, souring relations between the two countries.

However, it appeared the Oksuz investigation could be part of both countries' push to normalize relations.

Reports in the German media suggested that Berlin was ready to once again raise arms exports to Ankara in exchange for the release of German citizens imprisoned in Turkey on allegedly political charges, such as Die Welt correspondent Deniz Yucel. However, any chances of increased weapons exports were effectively dashed this week after images of German-made Leopard tanks being used by the Turkish army against Kurdish forces Syria caused widespread outrage in the EU country.

It appears Berlin is willing take another approach. Given the political charges facing Oksuz, German law makes it near impossible to deport him to Turkey. However, it would still be feasible for him to be prosecuted by a German court.