Berlin and Ankara are willing to overcome their differences "through dialogue," said Turkish Foreign Minister Mevlut Cavusoglu during a visit to Germany. He described his German colleague Sigmar Gabriel as a "friend." 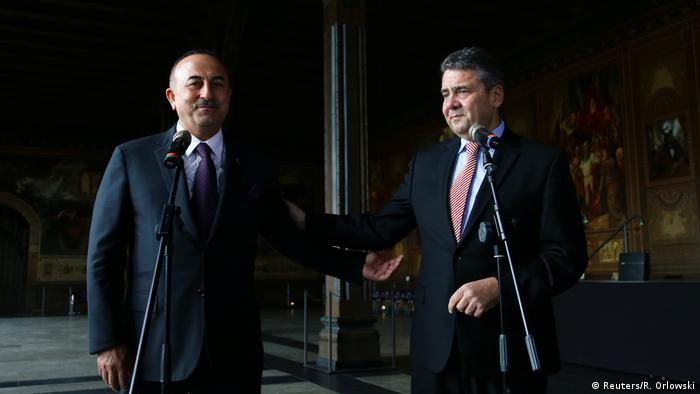 Addressing reporters at a joint press conference, Cavusoglu described Gabriel as a "personal friend," and Germany and Turkey as two "proud" nations.

"We are in agreement and both willing to overcome these tensions, these differences, through dialogue," he said.

Among other issues, Cavusoglu signaled Ankara's interest in renewing talks on a customs union between the EU and Turkey.

In turn, Germany's top diplomat Gabriel announced the revival of a joint economy commission that had been put on ice amid the diplomatic spat.

Gabriel also said the two officials intended to do everything possible to "find more common ground in the future."

The ties between their countries are burdened by a myriad of issues, including Turkey's fury over German comedian Jan Böhmermann insulting President Recep Tayyip Erdogan, the German resolution on the Armenian genocide and Ankara's massive crackdown following a failed coup in July 2016. Germany also decided against allowing Turkish politicians to campaign for a controversial referendum to Turkish voters inside Germany. Erdogan said Berlin used "Nazi" methods by blocking campaign rallies.

Most recently, however, Berlin and Ankara clashed over the fate of German citizens arrested in Turkey. The German public was especially disturbed about the detention of Die Welt reporter Deniz Yücel, who has spent 10 months in jail without an indictment.

Military equipment has 'nothing to do' with prisoners

On Saturday, the two officials avoided giving details on the issue. However, Gabriel seemed to confirm that the topic of Yücel had been raised during the private talks.

"I can only say that we talked about all topics, including the difficult ones," he said, answering a question on Yücel. "He is definitely one of them."

Gabriel also denied recent reports that Berlin was considering halting a delivery of military equipment to Turkey as a means to pressure Ankara to release its prisoners. The German government is soon due to discuss the planned sale of mine protection equipment to Turkish armored vehicles, Gabriel said.

However, this has "nothing to do with the prisoners in Turkey, absolutely nothing," he added.