A derivative of the Artemisia annua plant, also known as sweet wormwood, has long been used in the treatment of malaria. Scientists are currently testing the plant’s potential against the novel coronavirus Sars-CoV-2. 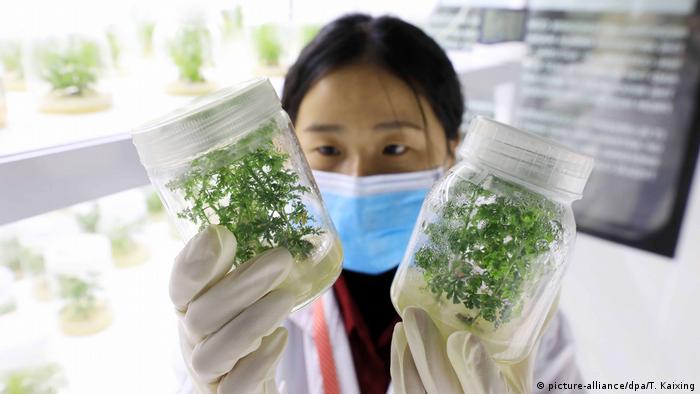 Researchers at Germany's Max Planck Institute of Colloids and Interfaces in Potsdam have been working with researchers from Berlin's Free University and other institutions for weeks, testing whether Artemisia annua plant extract and its artemisinin derivatives, could eventually be used to fight the novel coronavirus.

"We extracted pure substances from the Artemisia plant and combined it with the virus," explained Peter Seeberger from the Max Planck Institute, who is co-head of the study along with the chemist Kerry Gilmore.

The study is yet to be peer-reviewed.

"Since I work with combinations of Artemisia plants, I am very familiar with the interesting activities of plants that can work against different diseases, including a whole series of viruses," said Seeberger.

He said that's why it made sense to him and his colleagues to look into the possible effects on Sars-CoV-2.

The plants used in the study were cultivated in the US state of Kentucky.

Researchers found that the leaves of Artemisia extract showed anti-viral activity after being extracted with pure ethanol or distilled water.

The anti-viral activity increased considerably when the ethanol extract was combined with coffee.

"I was surprised that Artemisia extracts worked much better as a derivative, and that adding coffee increased the anti-viral activity," said Klaus Osterrieder, professor of virology at the Free University.

In April, Madagascar's President Andry Rajoelina promoted an unproven herbal concoction made from the Artemisia annua plant produced in the country called Covid-Organics.

There have been no clinical trials of the remedy, however.

The World Health Organization "urges extreme caution over reports touting the efficacy of such products.” The WHO also warns that there is "no evidence to suggest that COVID-19 can be prevented or treated with products made from Artemisia-based plant material.”

"In recent weeks we have been asked over and over again to say something about Covid Organics. We have tried to get hold of some," said Seeberger. "Unfortunately, we weren't able to get hold of any samples. I think it's a real shame. If it really works, it would be great to be able to test it. As far as we know, there have not been any scientific studies so far."

Plant extracts have long been used in different parts of the world to treat infectious diseases.

Artemisia has traditionally been used to treat fever, and its derivative artemisinin is now used as the basis of an anti-malaria combination therapy used to successfully treat millions of adults and children each year.

The Chinese pharmaceutical chemist and malariologist Tu Youyou discovered artemisinin in 1972 and was the co-recipient for the Nobel Prize for Medicine in 2015 for her discovery.

With regard to the novel coronavirus, Seeberger warns that people should be vigilant, considering there is growing resistance to Artemisia annua.

"We would like to warn those people living in malaria-endemic areas against taking these extracts," he said. "We should really wait until there have been controlled clinical studies."

The University of Kentucky is set to start clinical studies into the effects of Artemisia annua combined with coffee and tea. The effectiveness of artesunate, another derivative of the plant that is used to treat malaria, will also be tested.

Scientists in Mexico are also interested in conducting clinical trials.

Only with lab tests and clear results will it be possible to determine whether Artemisia annua can be used effectively to treat COVID-19.