A group of AfD politicians have called on the party to distance itself from its firebrand leader in the eastern state of Thuringia, Björn Höcke. The party's top brass did not sign, but did join in the criticism of Höcke. 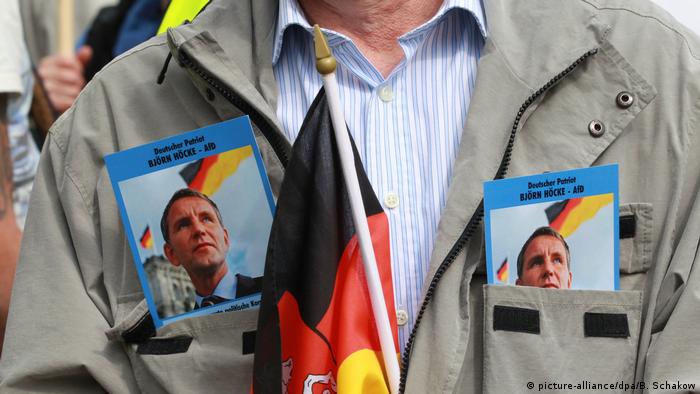 A hundred prominent politicians of the far-right Alternative for Germany (AfD) have called for the party to distance itself from its leader in the eastern state of Thuringia, Björn Höcke, according to an open letter published Wednesday.

Höcke has gathered momentum around his radical wing, which some AfD officials have argued undermines the party's attempt to distance itself from extremist political groups.

"The AfD is not and will not be a Björn Höcke party," the letter said. The AfD's members reject "the heavily displayed cult of personality around Björn Höcke."

While AfD co-leader Alexander Gauland said he could see why party politicians supported the appeal, he admitted that he did not sign it "because I consider it similarly inappropriate during election campaigning."

Fellow AfD co-chair Jörg Meuthen also did not sign the open letter. Yet he too responded to questions from German news agency dpa, saying that Höcke should concentrate on upcoming local elections and that the "cult of personality" around him did not suit the AfD.

Read more: Does the anti-immigrant Alternative for Germany (AfD) party have any alternatives for the country?

The AfD is polling in leading positions for three state elections slated for autumn, according to surveys. The elections will be held in Brandenburg, Saxony and Thuringia, where Höcke co-leads the party.

Last week, Höcke triggered an outcry from the party's center-leaning members when he told hundreds of supporters that immigrants had never been economically beneficial to Germany.

"What is also clear is that the policy of open borders practiced for decades, ever since 1955, this irrational migration policy for which the old parties are responsible, has bled us financially, as if we had lost another war," Höcke said.

Höcke narrowly kept hold of his party membership last year after comments made in 2017, when he lamented that Germany's "stupid" efforts to remember and learn from its Nazi past had "crippled" the country.

Once a euroskeptic party, the AfD made political inroads when it started to criticize German and European migration policy, most notably Chancellor Angela Merkel's reaction to 2015's mass migration from the Middle East and Africa.

However, the party has been hit by several scandals since entering the Bundestag — Germany's lower house of parliament — for the first time in 2017, including controversial remarks from politicians and illegal campaign financing.

Election officials in Saxony are getting police protection due to concerns for their safety. The eastern state's election body began getting threats after it disqualified far-right AfD candidates from an upcoming poll. (09.07.2019)