Germany: Conflict in AfD pulling party to the right | Germany| News and in-depth reporting from Berlin and beyond | DW | 07.07.2019

In at least three German states, extremist elements of the far-right Alternative for Germany are threatening to take over the party. The nationalist wing led by Björn Höcke is becoming increasingly powerful. 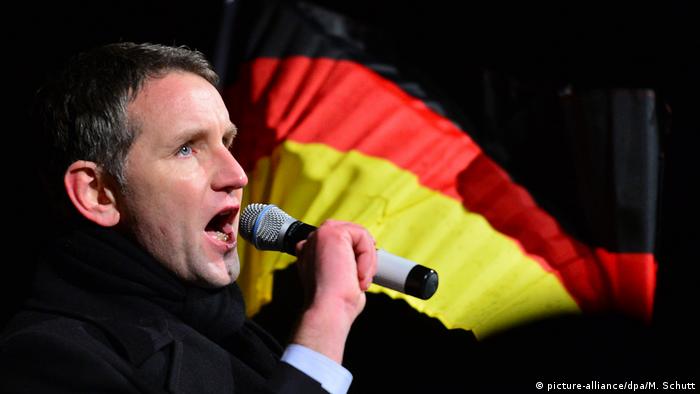 Regional factions of Germany's far-right Alternative for Germany (AfD) are threatening to shift the party even further to the right as extremists gain more control.

A power struggle at a conference in the AfD's largest regional group, in the state of North Rhine-Westphalia, ended with the resignation of nine of the group's 12 leadership board members on Saturday.

This left the rump leadership under the control of deputy chairman Thomas Röckemann, considered a supporter of the AfD's hard-nationalist wing that looks to Björn Höcke for its leadership. The conference in the small town of Warburg, meant to last two days, was broken off after a day following the resignations.

The event played out amid bitter recriminations from Helmut Seifen, one of the resigning AfD state co-chairmen. Considered a moderate in the party, Seifen accused members of the AfD's Höcke wing of undermining the party across the country and acting against the party's interests.

"Their loyalty is first and foremost to the 'wing,'" Seifen said in his speech. He added that it had become impossible to run the party "pragmatically" with Röckemann on the board. Röckemann responded defiantly, rejecting calls to resign. "I, for my part, have the balls to follow through on what I started," he said.

Röckemann added that he would campaign to ensure that the vacant spaces on the board were "occupied by good people," and that his supporters represented the last line of defense against a "green dawn" of "eco-socialists" in Germany.

Read more: Is the AfD a one-trick pony?

Meanwhile, the Welt am Sonntag newspaper reported on Sunday that an internal party tribunal in the AfD's Bavarian group determined that the Höcke wing of the party represented an autonomous organization that was in competition with the rest of the AfD.

The decision was made in connection with a motion to exclude Bavarian AfD official Benjamin Nolte from the party. According to the newspaper, Nolte had broken party regulations by working in the interests of the Höcke wing and had attempted to undo party resolutions meant to separate the party from extremist political groups.

This marks the first time that an official AfD document makes a distinction between the party and Höcke's group within it.

A similar internal struggle is splitting the AfD in the northern state of Schleswig-Holstein, where the local party group has just elected a leader, Doris von Sayn-Wittgenstein, whom the federal party leadership wants excluded from the party.

The party leadership insists that von Sayn-Wittgenstein supported a right-wing revisionist group considered to deny the Holocaust. The AfD's federal leadership believes that her election as a state leader would "send a wrong signal."

Read more: Germany's conservatives divided on how to cope with AfD

Meanwhile, Höcke himself spoke to around 800 of his supporters at a meeting in the small town of Leinefelde, in his native Thuringia,  on Saturday. According to a report in Stern magazine, Höcke used his speech at the annual "Kyffhäuser" meeting to deny that immigrants had ever been economically beneficial to Germany.

"What is also clear is that the policy of open borders practiced for decades, ever since 1955, this irrational migration policy for which the old parties are responsible, has bled us financially, as if we had lost another war," Höcke told his supporters.

But Gauland avoided the internal strife and addressed another setback for the far-right party in the state of Saxony, where two-thirds of the AfD's list candidates were excluded from the election in the fall after failing to register properly. Gauland accused Saxony's election committee of trying to rob the AfD of its electoral success with "tricks."

Three eastern German states, Brandenburg, Saxony, and Thuringia, are due to elect new parliaments in the fall. The AfD is currently polling in first or second place in all three states.

Read more: How will the far-right AfD party shape the European Parliament?

George Soros' Open Society Foundation is gearing up to battle hate and the far-right in eastern Germany. The Alternative for Germany (AfD) is predicted to perform well in three upcoming state elections. (22.06.2019)

State lawmakers have agreed to lift the parliamentary immunity of regional leader of the far-right AfD, Björn Höcke. The politician is accused of using photos of a victim of a murder for his own political ends. (14.12.2018)

The right-wing populist party has threatened legal action against the Radisson Blu in the border city of Szczecin. The meeting had been booked in Poland after the AfD was unable to find accommodation in Germany. (28.06.2019)