Germany rules out nuclear for backup power | Germany| News and in-depth reporting from Berlin and beyond | DW | 31.08.2011

The agency that oversees Germany's power plants has rejected calls to put a deactivated nuclear plant back online to deal with possible shortages over the winter. Instead, fossil fuel-burning plants will be on standby. 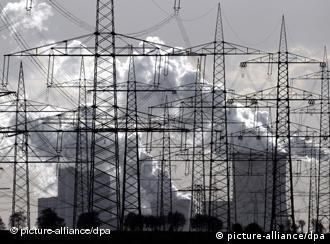 Coal-fired plants will be on standy for reserve capacity

Germany will not reactivate any of the seven nuclear power plants that it shut down earlier this year to provide reserve power for the coming winter.

"We won't have to reactivate a nuclear power plant," Matthias Kurth, president of the Federal Network Agency, told reporters in Berlin on Wednesday. However, he warned that the power supply in Germany would be "very tight" for several years.

There had been calls for one of the deactivated power plants on standby to pick up the slack if shortages develop during peaks in demand during the winter. Instead, five conventional power plants are to be put on standby. These include plants that produce electricity by burning coal, gas or oil.

Kurth also conceded that creating this extra capacity would come at an additional cost to consumers and industry.

"But we have to be willing to pay for security," he said.

The decision not to bring one of deactivated nuclear plants back online, at least as a stop-gap measure, means a decision taken last month to shut them down is now final.

On July 1, the German parliament, the Bundestag, approved a plan by Chancellor Angela Merkel's center-right government to completely phase out the use of nuclear power by 2022.

Germany's seven oldest nuclear plants, taken offline as a precautionary measure following the disaster at the Fukushima plant in Japan in March, will remain shut down. An eighth plant is also offline due to technical problems. Nine remain operational.

The decision was a major about-face for Merkel's government, which had previously moved to extend the nuclear phaseout timeline passed in 2002 by the center-left government of former Chancellor Gerhard Schröder.

The opposition Greens and Social Democrats joined the governing coalition in voting to shut down all of Germany's nuclear power plants over the next 11 years, putting aside their hopes for an even earlier end date. (01.07.2011)

Chancellor Angela Merkel has weighed in on Germany's ongoing nuclear energy debate, saying the country needs to run its nuclear energy plants for up to 15 more years, angering green campaigners and the opposition. (30.08.2010)