Up to 30,000 migrants living in Germany for years on suspended deportation orders are to be granted residency under a law amendment. Another parliament move to expel those unwanted has been slammed by asylum advocates. 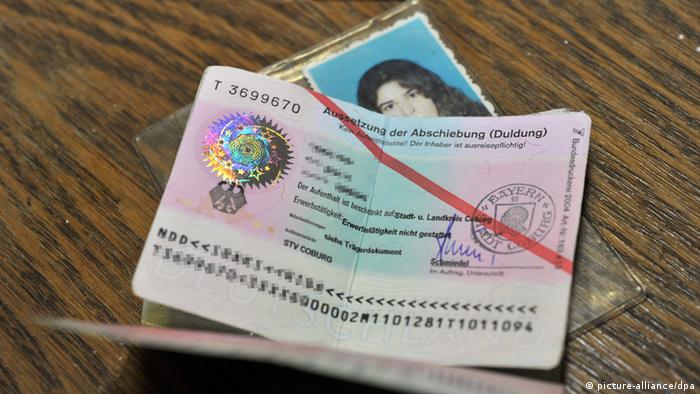 The Bundestag on Thursday decided that local authorities can grant residency permits to adult migrants whose stays have been "tolerated" for at least eight years. They will also need to speak German well, and have largely self-sufficient incomes.

Under Paragraph 60 of Germany's residency law, authorities can issue a registration document to a person otherwise required to leave stating that his or her deportation has been temporarily suspended, for example, when a legal appeal is pending.

It removes the risk of them being caught as an "illegal over-stayer."

Thursday's law change will also allow "tolerated" persons with children - younger than 18 - to apply for residency after six years.

For stay-tolerated teenagers that time limit will shrink to four years, under the amendments adopted with the votes of Chancellor Angela Merkel's coalition majority. 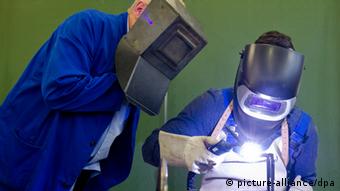 Short of trainees, German industry has turned to migrants

Young migrants keenly sought by German industry as apprentices but whose right to stay has remained uncertain are to get residency permits from their local authority for the duration of their training, according to the interior ministry.

Federal Interior Minister Thomas de Maiziere said the changes to Germany's residency law, or Aufenthaltsrecht, enabled authorities to decide "clearly" between those needing protection and those whose stay was unjustified.

To complete its passage, the amendment is slated on next week's agenda of Germany's upper chamber, the Bundesrat, comprising the 16 federal states.

Tougher expulsion measures included in the law change were slammed by the opposition Greens and Left parties, as well as the Frankfurt-based refugee organization Pro Asyl [pro-Asylum].

Those suspected of trying to avoid deportation can in future be held for up to four days, for example, in the transit zone of an airport, under parliament's law change.

Migrants who try to re-enter Germany could face a limited-term exclusion ban - a move intended to deter asylum seekers from lodging fresh applications.

A decision to deport or to allow to stay will in future hinge solely on two criteria: the German state's interest to expel, for example, if the foreigner commits a crime; versus the interests of the migrant, such as his or her family situation.

A current discretionary power given to local authorities is to be wiped.

A judge will be allowed to order up to four days arrest prior to deportation if a foreigner displays "culpably" to avoid expulsion, for example, by disguising his or her true identify or paying sizeable fees to a "people smuggler."

This requires asylum-seekers to lodge their applications in their first European country of arrival, usually Italy or Greece.

Currently, Germany seldom used detention prior to deportation, he said.

Jesuit counselor Father Ludger Hillebrand told Berlin's Tageszeitung newspaper that in the future refugees could be arrested merely by stepping foot in Germany. Until now that was legislatively "almost impossible," he said.

Of these, Pro Asyl calculates that some 10 percent are "tolerated" persons who have already resided in Germany for more than 15 years.

Aydan Özoguz, who is the government's Integration Commission and a member of the Social Democrats, the center-left partner party in Merkel's coalition, said the law change package was especially important for young "tolerated-stay" migrants.

She conceded, however, young trainees sought by industry because of trainee shortfalls countrywide still needed improvements to their legal status.

Chancellor Helmut Kohl once declared Germany a "non-immigration country." Today, Germany knows it needs migrants, and is in fact a top destination for immigrants. But integration policies can be improved, a study finds. (12.06.2015)

As European leaders argue about how to deal with the migrants landing on the continent's shores, those who were hoping to head north from Italy are finding they are stranded. Megan Williams reports from Rome. (22.06.2015)

The Aegean Islands are a major landing point for refugees on their way to Europe. The islanders are scrambling to cope with the new arrivals in the midst of Greece's financial crisis. Joanna Kakissis reports from Leros. (13.05.2015)