Ceremonies have been held to mark the 70th anniversary of a failed attempt by German military officers to kill Adolf Hitler. The conspirators are now regarded as German patriots for their actions. 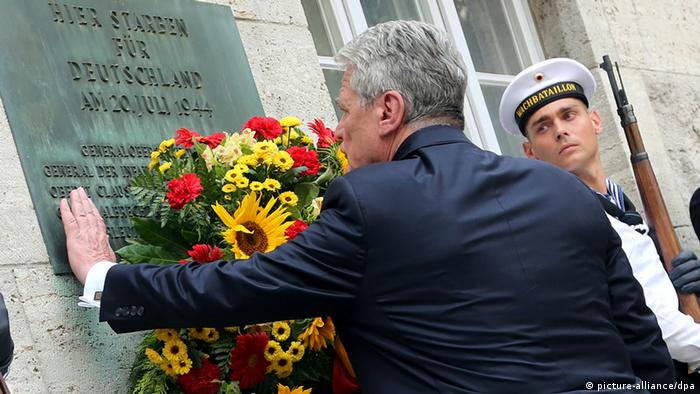 Speaking at the main remembrance ceremony in Berlin on Sunday, President Joachim Gauck said that the events of July 20, 1944 were a reminder to Germans about the importance of "bravely standing up for our values."

He also said that Claus Schenk Graf von Stauffenberg and his co-conspirators were true role models, particularly when it comes to "the battle against injustice and for human dignity."

"It was from this legacy that the newly founded Federal Republic, once it belatedly recognized the significance of the military resistance, was able to draw legitimacy," President Gauck added.

After his speech, the president was joined by the inspector-general of the Bundeswehr, Volker Wieker, in laying a wreath at the very site where Stauffenberg and three others were executed.

Earlier, the president had taken part in a church service in Berlin Cathedral, where the head of the council of the Evangelical Church in Germany (EKD), Nikolaus Schneider, said it was important to honor the efforts to resist Hitler made by the conspirators.

Schneider also said that the resistance showed that not all Germans had watched on passively or been enthusiastic followers of Hitler in the Nazi era.

On July 20, 1944, a group of Wehrmacht officers led by Stauffenberg tried to kill Hitler by leaving a bomb in one of his headquarters, known as the "Wolfsschanze" (Wolf's Lair).

Protected by an oak table, Hitler survived the attempt slightly wounded, though four other people were killed.

Stauffenberg and three other conspirators were arrested and executed a day later. Around 200 other people suspected of involvement in the plot were also executed or murdered in concentration camps.