Germany remembers failed Hitler assassination with attack on populism | Germany | News and in-depth reporting from Berlin and beyond | DW | 20.07.2018

German Foreign Minister Heiko Maas condemned right-wing populism in Europe as he commemorated the 1944 plot to kill Hitler. The minister noted that some in the anti-Nazi resistance dreamt of a "European federation." 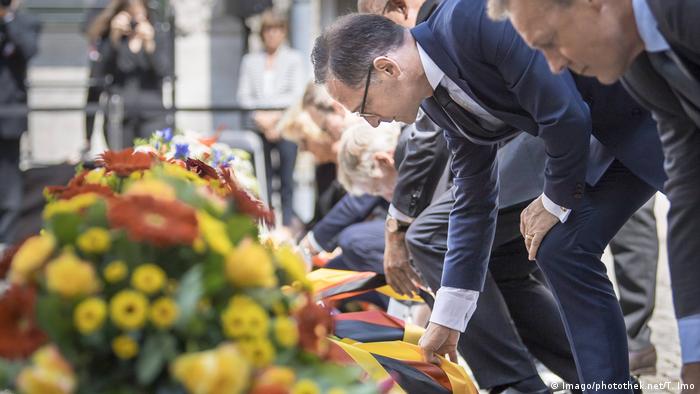 The German foreign minister marked the 74th anniversary of the failed plot by German army officers to assassinate Adolf Hitler by condemning today's right-wing populists and calling for a more united Europe.

The solemn military ceremony, in the courtyard of the Bendlerblock building in Berlin where Claus Schenk Graf von Stauffenberg and four of his co-conspirators were executed after their attempted coup failed on July 20, 1944, is usually framed as a celebration of the re-establishment of justice in Germany following the aberration of Nazism, but this year there was a clear note of defiance against new far-right populism in Europe and around the world.

Both Foreign Minister Heiko Maas and Berlin Mayor Michael Müller used their speeches to draw parallels between the European resistance to Nazism and what Müller called "the duty of vigilance for the creeping establishment of intolerance and prejudices, of anti-Semitism and right-wing populism." 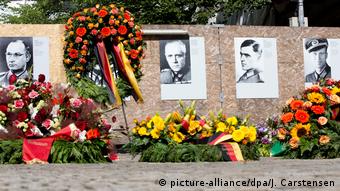 The German army commemorates the July 20 plot every year

The speakers also expressed outrage at attempts by far-right populists in Germany to stage their own commemorations for the July 20, 1944 plot – though without naming the far-right Alternative for Germany (AfD) party directly.

"They claim for themselves the sole right to represent and recognize the true will of the people," Robert von Steinau-Steinrück, chairman of the July 20, 1944 remembrance foundation, said in his opening remarks on Friday.

"Their actions and their language are totalitarian," von Steinau-Steinrück added. "But the resistance was anti-totalitarian. For that reason I want to make clear once again – also in the names of the families of the relatives – that the foundation of July 20, 1944 distances itself in the strongest possible terms when right-wing populists try, as now happens every July 20, to use women and men of the resistance for their own aims. That is nothing less than abuse." The hundreds of spectators in the courtyard applauded.

Foreign Minister Maas took up the theme, condemning as "intolerable" the fact that a flag designed by German resistance fighter Josef Wirmer is now sometimes flown at rallies organized by the anti-Muslim PEGIDA movement and neo-Nazis.

"Today those who claim their 'right to resistance' loudly abuse representatives of the people as 'traitors of the people,' reject remembrance as a 'guilt cult,' and defame the free media as 'lying press'," Maas said, while US President Donald Trump's new ambassador Richard Grenell looked on among many foreign diplomats who attended the ceremony.

Resistance to Nazism and European unity

Maas also called on citizens not to remain silent. "Let us intervene when discussions among our family or friends drift into blunt resentments! Let us counter the doom and gloom scenarios of the right-wing populists with arguments and facts! Let us express complex points when nationalists dangle all-too-simple solutions!"

Maas went on to praise new initiatives to teach young people about the pan-European resistance to Nazism and fascism, and drew a connection between the resistance to the Third Reich and the dawn of European unity.

Invoking Adam von Trott zu Solz, an ally of von Stauffenberg who developed a vision for a politically united Europe before his execution by the Nazis in 1944, the minister said, "For him and his colleagues it was clear: peace in Europe could only be achieved by overcoming borders. His hopes rested on a European federation – with its own army, a customs union, a common currency, and a common supreme court."

The ceremony, attended by surviving relatives of the German resistance, as well as the head of the German Army, General Eberhard Zorn, commemorated von Stauffenberg, his co-conspirators, and other Germans who lost their lives resisting the Nazi regime, including Sophie and Hans Scholl, Ulrich von Hassel, Julius Leber, and Walter Klingenbeck. The Bendlerblock building was one of the main Wehrmacht headquarters during World War II, and now houses the German Defense Ministry.

74 years after the failed assassination plot on Adolf Hitler, hundreds of descendants of Nazi resistance fighters have made an urgent public appeal for a united Europe. (20.07.2018)