Nearly one-quarter of high-speed trains did not reach their destination on time in 2021. Long delays and canceled trains have become routine across Germany. 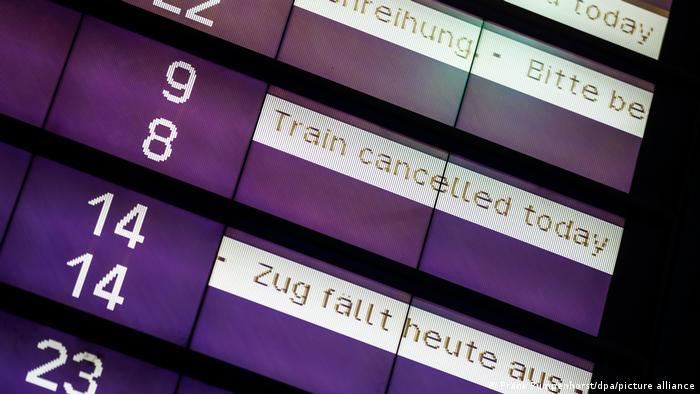 It has become something of a national joke in Germany that the national train system does not exactly live up to its international reputation as a bastion of punctuality.On Wednesday, rail operator Deutsche Bahn published the statistics to prove it.

According to DB, only 75.2% of its inter-city services known as the ICE and IC trains reached their destinations on time. This represents a significant dip from 82% in 2020.

The 2020 numbers had marked a 15-year record high in punctuality. Many, however, speculated that the timeliness of trains in 2020 was due to the fact that trains ran less often and not as far during the first year of the pandemic, when many routine passengers began to work from home and skip unnecessary trips.

In a press release, Deutsche Bahn blamed a number of factors for the steep decrease in punctuality in 2021, including the damage from July's devastating floods in western Germany that destroyed more than €1 billion worth of rail infrastructure.

The company also pointed the finger at a rail workers' strike over employment conditions as well as an increase in construction on the tracks after many renovation projects were put on hold in 2020.

"This led to many bottlenecks in our network," the company said, adding that this was problematic not only for its passenger trains but for its expansive cargo network as well.

Transportation experts have long said that the German government invests too little in the country's rail system, giving primary focus to the auto industry. Researchers have also suggested that since DB went to a partly-public, partly-privatized business model, it has implemented a management structure that makes it easy to pass the buck to another branch of the company when problems arise.

Despite this, Deutsche Bahn recently announced that it would both increase prices for consumers as well as receive a multi-billion euro bailout from Berlin to cover the losses it incurred due to pandemic-related travel reduction.