Germany promises record contribution to WHO

The infusion of half a billion euros to help fight the coronavirus pandemic would be the highest ever annual contribution to the WHO by Germany. 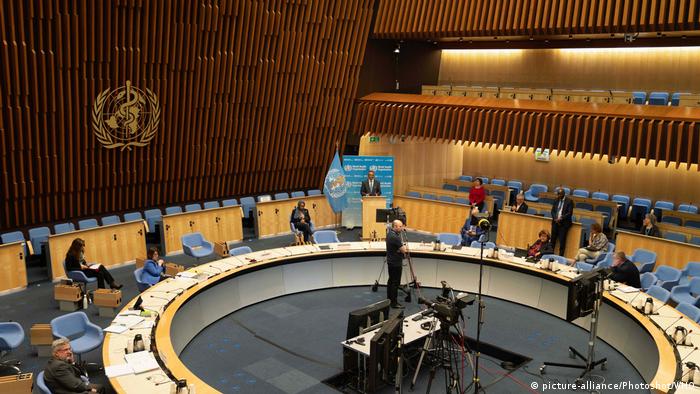 Germany will contribute more than €500 million ($561 million) in funding for the World Health Organization (WHO) this year, Health Minister Jens Spahn said on Thursday.

"We stand together in fighting global health problems," Spahn said at a press conference in Geneva, adding that the aid infusion amounted to Germany's highest-ever annual contribution to the WHO.

"We need a strong, transparent and accountable WHO today more than ever," he said. "A WHO able to lead and coordinate the global response effort."

The WHO is dependent on donations and membership contributions from its 194 member states, along with donations by international organizations and private donors.

Along with an infusion of €110 million already promised by Germany to fight the coronavirus epidemic, an additional €200 million will be allocated, Spahn said.

Another €41 million will be allocated to support the WHO's core functions. Masks and medical devices such as respirators would also be provided for.

The new support package must first be approved by Germany's parliament, the Bundestag, Spahn said, adding that the government is very optimistic that the proposed infusion will be passed by the beginning of July.

Help where it is needed

Member state dues to the WHO are called "assessed contributions," which countries pay to be part of the WHO. Although they only account for a quarter of the WHO's total program budget, they offer a measure of predictability.

However, the majority of WHO funding comes from on-top voluntary donations by member states.

The United States, by far the biggest contributor, announced in May that the US government would cease funding and pull out of the WHO over the health body's handling of the pandemic, and for being "China-centric."

During the last WHO budget cycle at the end of 2019, the US provided over 15% of the WHO's funding, with a total contribution of $893 million.

Although the US withdrawal has yet to be made official, the potential budgetary gap during a global pandemic is a daunting prospect.

According to the WHO, Germany's total contribution during the last budget cycle was over $292 million, 80% of that coming from voluntary contributions.

The World Health Organization has drawn sharp criticism from some quarters over its deference to Beijing and the way it handled the COVID-19 pandemic in recent weeks. (17.04.2020)