Germany preparing for no deal on Brexit, says Merkel

Angela Merkel says a deal for Britain to leave the European Union is still possible. But, the German chancellor says, not enough progress has been made on central issues and an agreement is not inevitable. 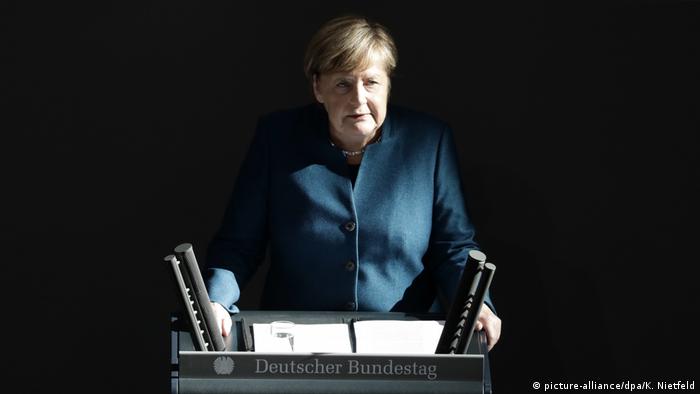 Having been buffeted in recent weeks by domestic political difficulties, Angela Merkel was eager to appear confident and relaxed ahead of a crucial EU meeting on Brexit. Remarkably, the chancellor didn't mention Britain's impending departure from the European Union for 15 minutes in her official government address on that very topic.

As has become her wont in parliamentary speeches, the chancellor began by listing the advantages of a united Europe. And, when she did turn to Britain, her words were moderately pessimistic.

"Both sides have shown good will and willingness to compromise," Merkel said. "Unfortunately there's been no deal on the question of the border between Ireland and Northern Ireland. The devil is in the details."

Negotiators are seeking a deal that would avoid any kind of hard border between Northern Ireland and the Republic of Ireland. Most consider this necessary in order to uphold terms of the 1999 Good Friday Agreement, which largely defused decades of conflict in Northern Ireland. Merkel reaffirmed her support for this position.

British Prime Minister Theresa May has signaled willingness to entertain the idea of a "backstop" that would see Northern Ireland remaining in the EU customs union and abiding by the bloc's rules. But Brexit hard-liners have vowed to scuttle any deal that, in their eyes, creates a new border in the Irish Sea between Northern Ireland and the rest of the United Kingdom.

Merkel said "the chance of achieving a good and sustainable withdrawal agreement in good time" was "still there," but added that Germany was already preparing for the eventuality of no deal and what it could mean for such issues as customs duties and the status of British citizens living in the European Union. And she re-emphasized that Brexit would not mean membership in all but the name for the United Kingdom.

The angle of the sun shining through the Reichstag's glass dome caused Merkel and the other speakers to squint and made the televised broadcast of the parliamentary appear as though it were in black and white.

The chancellor's speech was directed least as much at domestic voters as at May and the United Kingdom. On the one hand, more than 80 percent of Germans said in the latest European Commission survey that the country is better off within the EU. On the other, many of these people are not comparably enamored of how the bloc is currently run — or of Merkel's coalition government of conservatives and Social Democrats, both of whom were hammered in Sunday's regional elections in Bavaria.

Merkel would like to portray herself as a guarantor of the advantages of EU membership she enumerated at the beginning of her address — with Britain as a negative example of the dangers of torpedoing the status quo.  At the same time, the chancellor and the rest of the leaders of the 27 states that would remain in the EU can't afford to completely alienate a large trading partner by appearing to be vengeful during Brexit negotiations.

The chancellor's words may resonate when she argues that the EU's customs union and the euro currency help insulate members against global economic uncertainty. But even she is increasingly forced to admit that the bloc is not a particularly well-functioning forum for addressing all the pressing issues of the day, for example, the "fair distribution of refugees." That, Merkel acknowledged, was an "unresolved problem."

And it's not the only one at the moment with the European Union, as opposition speakers were quick to point out. 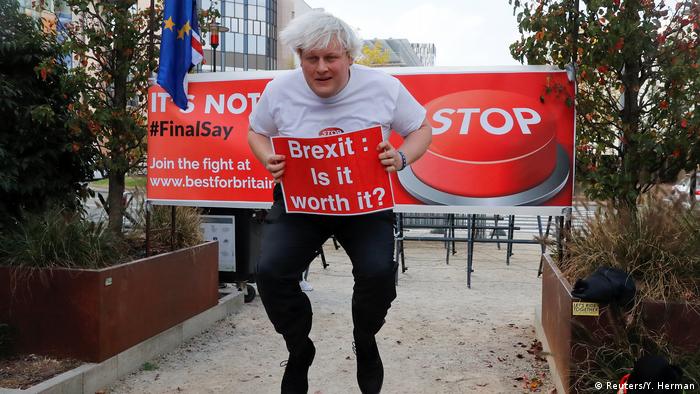 There were anti-Brexit demonstrations, complete with a Boris Johnson imitator, ahead of the EU meeting in Brussels

The anti-EU, far-right Alternative for Germany (AfD) party accused Merkel of trying negate the democratic decision of British voters to leave the EU.

"The EU bureaucrats are afraid that the union can't be preserved without threatening gestures, and you made that more than clear in your speech, Mrs. Chancellor," AfD co-leader Alice Weidel told parliamentarians.

By contrast, the pro-EU, left-leaning Greens took Merkel to task for failing to promote the bloc with sufficient gusto.

"Eighty-one percent of people in Germany say that the EU is a good idea, and I tell you, Mrs. Merkel, this 81 percent didn't deserve such a tedious, unambitious, dispassionate speech," Green parliamentary leader Katrin Göring-Eckardt said. Such is the spectrum of opinion in Germany about the EU, even though the country is considered one of the bulwarks of the bloc.

There was certainly no lack of passion from Martin Schulz, the former leader of the Social Democrats and a previous president of the European Parliament. He, too, offered a long list of the EU's advantages, concluding that "Europe is not the European Union, but the European Union is the best thing to happen to Europe since the end of the Second World War."

Merkel might well have been buoyed and motivated by Schulz's words, but the embattled chancellor had already left the Bundestag to head for Brussels. There, many people expect her to lead the way on the Brexit issue and offer a vision for the bloc's future in a time of resurgent nationalism and populist opposition to the status quo.

British entrepreneurs who have settled down in France have been a blessing for the country's rural areas, but will this remain so after the UK's exit from the EU? Lisa Louis looks for answers in Verteillac. (16.10.2018)

EU and UK Brexit negotiators have paused talks until after this week's EU summit. Amid some speculation that officials would confirm a provisional Brexit deal on Sunday, the Northen Irish issue got in the way, again. (14.10.2018)