The German Foreign Ministry has offered €1 million in aid to rebuild Brazil's National Museum. Researchers are hopeful that some artifacts may still be found in the rubble. The cause of the blaze is still unknown. 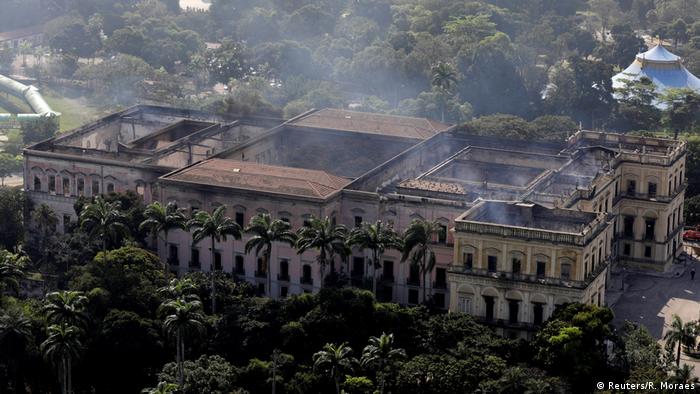 The German Foreign Ministry will coordinate national efforts to provide support in the cleanup and rebuilding of Brazil's National Museum, which was devastated by fire earlier this week, German Deputy Minister for International Culture Michelle Müntefering said on Wednesday.

Berlin has pledged €1 million ($1.2 million) in immediate emergency aid. Müntefering told the dpa news agency that she will hold a meeting with government officials, members of federal states and civil society to discuss the emergency response.

Several countries as well as international agencies, and UNESCO, the UN's cultural agency, have offered financial and technical assistance. UNESCO also accepted the help of German experts, who will soon travel to Rio to take part in the recovery of items that may have survived.

Rio's German sister city of Cologne also reached out in solidarity. Mayor Henriette Reker said she would offer her city's archivists to provide assistance and advice. "After the collapse of the Historical Archive in Cologne in 2009, we can empathize with what this loss means for the city of Rio de Janeiro, the country of Brazil and the memory of the whole population," she said.

Hoping to salvage what is left

Officials have said as much as 90 percent of Latin America's largest collection of treasures could have been lost in the fire. But researchers are holding out hope, as they wait to be allowed to enter the building and begin the search.

Museum officials said they were not yet able to ascertain just how much of the museum's collection was lost, as firefighters continue to work inside the building. Among the valuables is one of the oldest fossils ever found in the Americas, a skull named Luzia that dates back to approximately 12,000 years.

"Firefighters found fragments of bones in a room where the museum kept many items, including skulls," Cristiana Serejo, the museum's vice director, said on Tuesday. "We still have to collect them and take them to the lab to know exactly what they are."

No cause yet found

Raul Jungmann, Brazilian Minister for Public Safety, said that the cause of the blaze remains unknown. "All federal police efforts are centered on this," he said, adding that two investigative teams were currently in the building.

For now, Brazilian media have circulated two hypotheses about what could have happened: One implies that an electrical short circuit in one of the audiovisual rooms sparked the blaze, while the other questions whether a small hot air balloon on the building's terrace may have fallen and caught fire.

A fire has claimed the vast majority of more than 20 million artifacts at Brazil's biggest museum. Police deployed tear gas to control crowds who were demanding entry to inspect the damage. (03.09.2018)