Germany on course for World Cup after win in Iceland 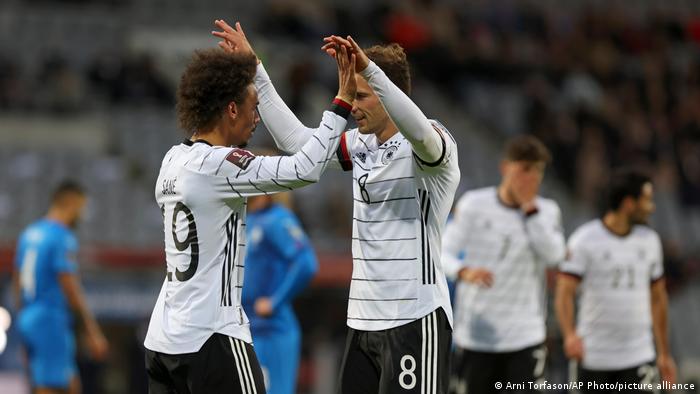 If the win against Liechtenstein was the slow start and the hammering of Armenia the arrival of Flick's Germany then the win in Iceland was the professional performance that Germany has not always delivered.

There were no nervy moments in this one. In front of a largely loud and proud set of 4,000 home fans in the rustic Laugardalsvöllur stadium in Reykjavik, Germany looked in control throughout, not suffering from what became a habitual crisis of confidence under Joachim Löw. If there was a criticism, it was that they didn't score as much as their play deserved, although Flick will be happy that Timo Werner did eventually get a goal.

"We didn't have many training sessions but we have nine points and that was our goal," Flick said afterwards. "The way we played football was a step forward...The team is really engaged and put into place what we wanted, put the opposition under pressure."

Deservedly it was Leroy Sané, who again looked strong down the left, who scored the decisive third. For all the talk of the lack of a striker being an issue, Serge Gnabry was also on the scoresheet again, taking his international tally to 19 goals in 29 games. Robert Lewandowski he is not, but score the goals he can. There was even a set-piece goal, Antonio Rüdiger's header a nice hat tip to new set-piece coach, Dane Mads Buttgereit, albeit two games after some underwhelming corners.

To exaggerate the rate of development or the potential of this side after just three games would be a touch sensationalist. Germany were expected to top this group and qualify for the World Cup without much of a fuss, and that is how it's playing out.

Nevertheless, after the last two years of stagnation, there is also room to acknowledge that in the last week Germany have taken a refreshing "step forward", as Flick put it. Something is growing here. A core group is appearing, a skillful supporting cast has stepped up, and there are even signs of character showing amongst some of the more socially-engaged members of the squad. The days of a hesitant, static Germany appear to be fading. Flickball is here and it's here to stay.

After climbing to the top of Group J at the weekend, Germany travel to Reykjavik to take on Iceland. Hansi Flick has won both his first two games in charge without conceding as Germany look to forge a new team and style.