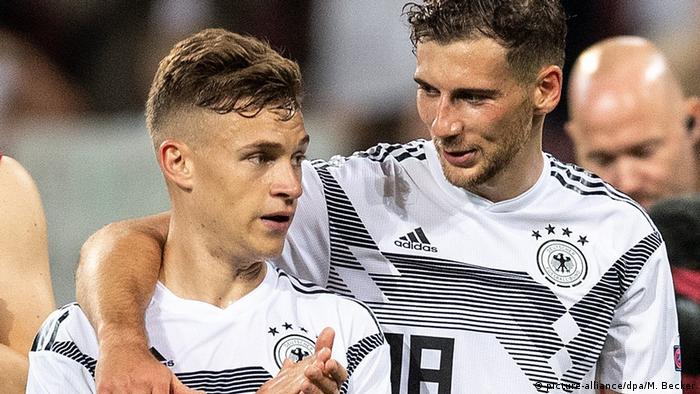 Joshua Kimmich and Leon Goretzka have been handed honorary "German Football Ambassador" awards as a result of their personal and generous commitment to the fight against COVID-19.

The two German internationals and Bayern Munich teammates launched their "WeKickCorona” initiative to help fight the spread of the virus, and kicked things off themselves with a joint personal donation of one million euros.

Given the current situation, the official award ceremony, originally scheduled for May, has been cancelled as organizers look for an alternative solution, but Kimmich and Goretzka still found time to say a few words.

"Health is first and foremost, and the solidarity of each one of us is needed more than ever in these times,” said Kimmich (25). "This was and still is our common goal. We are grateful for the enormous support we have received."

Goretzka (25) added: "This joint initiative is an expression of mutual giving and mutual help. This is exactly what is important in the present situation. We can only do it as a team."

Kimmich and Goretzka in good company

The German Football Ambassador award was established in 2012 and honors German sportsmen and women who contribute to the reputation of German sport throughout the world. Previous recipients of the honorary award include former German internationals Miroslav Klose and Thomas Hitzlsperger.

Roland Bischof, the founder and president of the German Football Ambassador Association, praised this year's ambassadors Kimmich and Goretzka for their "initiative on behalf of all those who, through their commitment, are supporting this great project in order to provide rapid assistance".

The "WeKickCorona” project comes as a sign of hope at a time of uncertainty, not least for professional footballers who do not know when or whether the current season will come to an end.

Kimmich and Goretzka have played a key role in Bayern's climb to the top of the Bundesliga, where they are four points clear of second-placed RB Leipzig with nine games remaining.

They were also due to feature in Germany's international friendlies against Spain and Italy this month, which have also been called off.