Largest meteorite in Germany discovered after sitting for decades in garden | News | DW | 15.07.2020

Largest meteorite in Germany discovered after sitting for decades in garden

The out-of-this-world find is being hailed as a "scientific sensation." The meteorite was first dug up in 1989 and sat in a garden for decades before the homeowner shared his unusual rock with researchers. 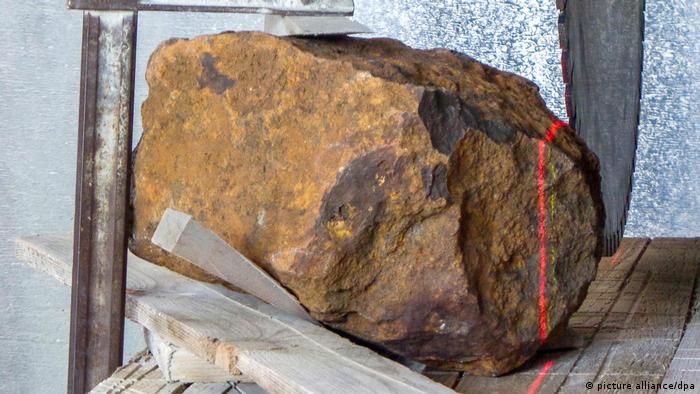 Researchers announced Wednesday the discovery of the largest-known meteorite to have landed in Germany.

The unusual find had been sitting for years in a garden in the southwestern German town of Blaubeuren, according to a statement from the German Aerospace Center (DLR).

"The find has a mass of 30.26 kilograms [66.7 pounds], which makes it the largest stone meteorite ever found in Germany," meteorite expert Dieter Heinlein said.

DLR posted a video of researchers cutting into the boulder encasing the meteorite on Twitter, saying there was an "unbelievable story" behind the discovery.

The unassuming, but unusual, rock was dug up in 1989 in the garden of a man living in Blaubeuren, a town with around 12,500 inhabitants.

When digging up the rock, he noticed how incredibly heavy the boulder was and noted its high iron content but did nothing further. The meteorite then sat for decades in the garden unnoticed.

"Even a professional would hardly have guessed it was a meteorite when first laying eyes on the heavily weathered boulder," DLR said in a statement.

Read more: Asteroids and comets: How to tell them apart

In 2015, the homeowner nearly threw away the meteorite along with other garden waste but changed his mind at the last second. He stored it in a cabinet in his basement for several more years before contacting the DLR in January of this year.

Tests at three laboratories later confirmed that the weathered garden rock was actually a meteorite. Scientists are now working to figure out when it fell to Earth.

Until now, a meteorite dubbed "Benthullen" bore the title as the largest to be found in Germany, weighing 17.25 kilograms (38 pounds).

The newly discovered meteorite has been dubbed "Blaubeuren" after the town in which it was found.

How high is the risk of a deadly meteorite impact?

How high is the risk of a deadly meteorite impact?

What should we do if at some point a giant asteroid or comet comes hurtling toward Earth? This week, experts in Maryland are discussing the dangers of meteorites and possible defense strategies. (30.04.2019)

A piece of the moon sold at auction will now go on display at the Tam Chuc Pagoda Complex in Vietnam. The meteorite was blasted off the moon and traveled 384,400 kilometers to Earth. (20.10.2018)