Work and live on Mars: Inside a new base developed for future missions | Science | In-depth reporting on science and technology | DW | 20.12.2019

Work and live on Mars: Inside a new base developed for future missions 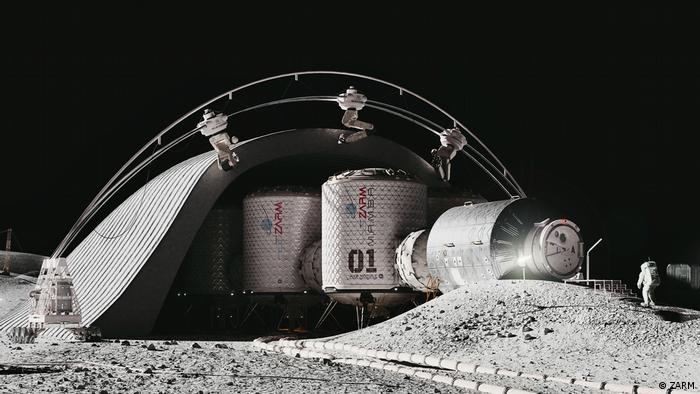 What will human life look like on the Moon or Mars?

One answer can be found at the Center for Applied Space Technology and Microgravity (ZARM) in Bremen.

It's situated on the outskirts of the northern German city in an inconspicuous building, right next to the world-famous drop tower — a building designed to conduct microgravity experiments. Inside the research center, there's a large multipurpose hall, where the future base's first prototype module, called the Moon and Mars Analog (MaMBA), was built.

Birgit Kinkeldey from ZARM shows us the first Moon and Mars module prototype and explains how it would work. 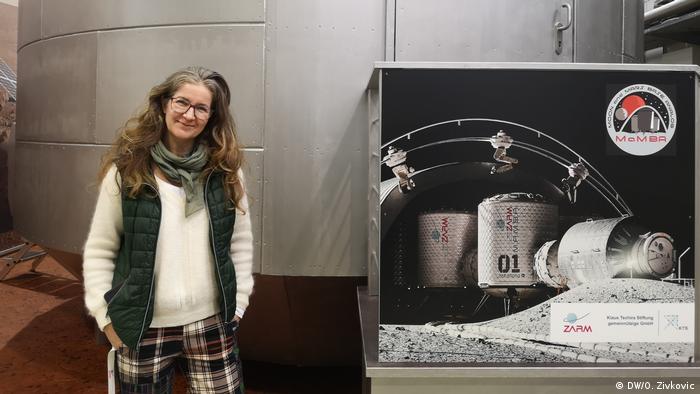 The cylinder-shaped object, which is six meters tall (20 feet) and five meters in diameter, is constructed of wood and painted a metallic gray. Wood on Mars? Of course not! Kenkeldey points out that the prototype wasn't made out of the same materials that'll be used in real construction conditions on the Moon or Mars. The model is made of wood in order to save valuable materials.

Around the world, dozens of other habitats have already been built over the past years, but their primary function was to study the psychological effect of astronauts' life in a confined space. Meanwhile, there is still no habitat that could actually support life in space.

Problems like producing food, recycling enough water and air as well as energy production still need to be solved.

The newly constructed base prototype, however, is similar to one that could eventually be used — one day — for such an ambitious space mission.

The brains behind the MaMBA project is a geophysicist named Christiane Heinicke, who previously lived for a year, isolated, on a Mars habitats called HI-SEAS on the Mauna Loa volcano in Hawaii. There, she was permitted to leave the base only in an astronaut suit.

During her stay, she understood the flaws of current habitats and what needs to be further researched. Heinicke decided to take the research a step further and, in 2017, she joined ZARM and started building the first prototype module. According to Kinkeldey, it is designed to actually sustain life on another planetary or lunar body.

Each of habitats constructed before MaMBA were created as parts of a joint building complex. One of the biggest flaws of such designs, however, is fire protection: It's very challenging for astronauts to escape in a case of a fire emergency. On a space station, or inside a habitat, they need to be able to seal and isolate any area affected by fire. For this reason, MaMBA, just like the International Space Station (ISS), is going to be constructed out of six separate, but interconnected modules, each of them providing two possible escapes to a neighboring one. 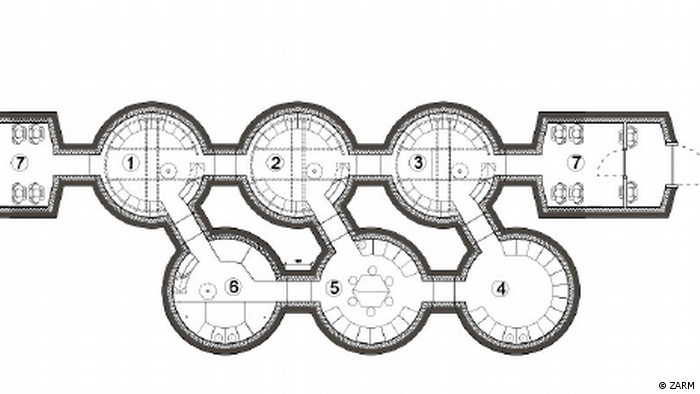 Previous habitats also had other flaws: The geometry was not pressure resistant. Nor were water and air was recycled in closed loops, but were instead provided from the outside, like in a normal building. Also, the buildings did not include radiation shields or even concepts of how such shields would affect the building in a lunar or Mars environment. Furthermore, laboratories in the habitats were typically poorly functional and not close to those that real astronauts use and will be using.

MaMBA, in contrast, is different — and is probably the most ambitious simulation project aimed at developing a functioning concept that could solve these crucial issues.

The first module prototype was built as a mock-up lab, which astronauts can use for simulating scientific research on the Moon and Mars. From the very beginning of its construction, the lab was designed to support various types of research designs.

Kinkeldey told DW that MaMBA would be a habitat designed to serve geophysicists, astrogeologists, astrobiologists, medics and all other scientists interested to in conducting extraterrestrial research.

The lab has about 15 square meters of space (160 square feet), and out of this, roughly eight are meant to be available for working and moving around. In next phases of the project, five more modules are supposed to be built, creating an entire functioning habitat. 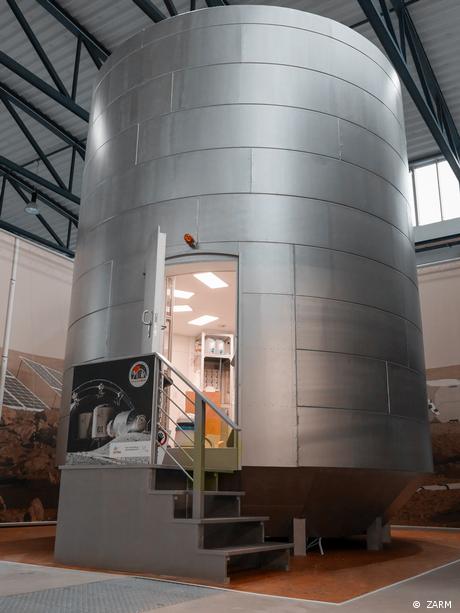 Each module serves a special purpose: Beyond the lab, there will be a module for workshops, one serving as a greenhouse and gym, a kitchen, a leisure room, a sleeping room and airlocks. Existing waste management and communication systems, like those used on the ISS, are also going to be integrated into the MaMBA habitat.

The three modules dedicated for work will have two stories in order to help scientists combat the feeling of isolation and confinement; leisure modules, meanwhile, will only have a single story.

Another significant aspect of MaMBA's design is that it supports, for the first time, a possible shield to protect the habitat from dust storms that could endanger life supporting systems, as well as highly dangerous cosmic radiation.

Kinkeldey explained that, in a real lunar or Mars station, the shield would be made out of regolith, meaning the stones and other minerals found on Mars. It is impossible, however, to test the actual construction of such a shield on Earth.

Actually constructing MaMBA on the Moon or Mars is something that will not happen soon. For now, MaMBA will serve scientists to explore the possibilities of working inside the mock-up lab, to test if this kind of design is suitable for working conditions. After that, engineering challenges are going to be tackled.

The MaMBA habitat is also supposed to be used first in a lunar simulation, since travelling to the Moon is the more feasible first step. If the habitat proves to be suitable for the Moon, there is a higher possibility that it would work on Mars. After all, the Red Planet has more favorable conditions: less cosmic radiation, higher atmospheric pressure, regolith that is more similar to particles on Earth, and similar night and day cycles.

So far scientists have conducted the first two weeks of simulations with two teams. During that time, their movements and interactions were monitored via cameras. Their pulse was also recorded with wristbands.

The trial simulation focused on scientists exploring ideas and conducting research while having to consider each other's working environment. The data collected enables researchers to analyze where the participants spent most of their time, what they were doing and how they interacted with each other. 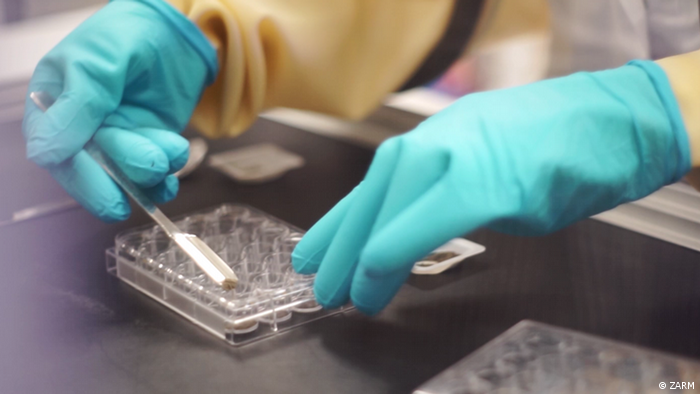 The participants also gave interviews to provide insights into what needs to be changed and improved, and how the participants felt during their working hours.

A real Mars habitat will have to be fully self-sustainable before humans can be sent there on long space missions, meaning it would also have to constructed by robots first. It would then have to be proven to be functional prior to the arrival of humans.

This means that there has to be a solution for a central issue in space travel: the production of food, oxygen, fuel and power. 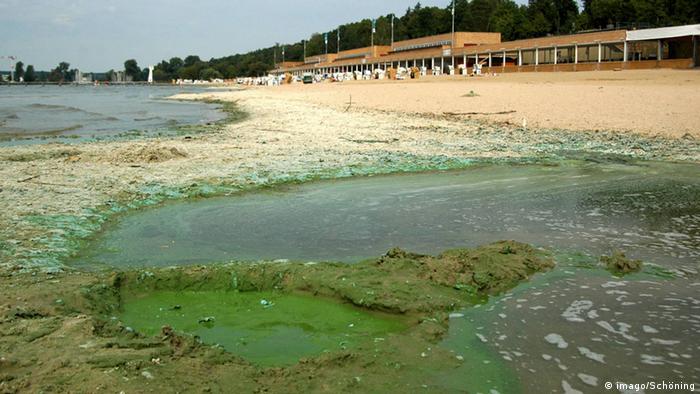 Cyanobacteria are found in lakes during summer

A possible solution provided by ZARM is a bioregenerative  life-support systems containing cyanobacteria, which would be integrated into the walls of the MaMBA habitat. Kinkeldey explained that these cyanobacteria are able to survive on Mars by processing the regolith, atmospheric gases and water extracted from the ice found on Mars.

These organisms are capable of producing materials for food, medication, oxygen and fuel, which would be used for power systems. They would also serve as another shield against cosmic radiation.

One of the participants in the two-week long simulation, astrobiologist Cyprien Verseux, has set up a Laboratory of Applied Space Microbiology (LASM) at the ZARM. There, he conducts extensive research on these bacteria, which are crucial to succesful long-term space travel.

So, when are we going?

Since the beginning of space exploration in the 1950s, scientist have been talking and dreaming about going to Mars. One of the crucial reasons for such interest is the possibility of finding signs of life there.

Some enthusiasts argue that settling Mars could also ensure the survival of humanity, since it would enable humans to escape from Earth. Mars is the most attractive option for setting up a human habitat, since it is the only potentially habitable planet in our solar system that has an atmosphere (even though it is only a fraction of the Earth's). Others dismiss the idea, saying that protecting our own planet is a much more reasonable and logic proposal. 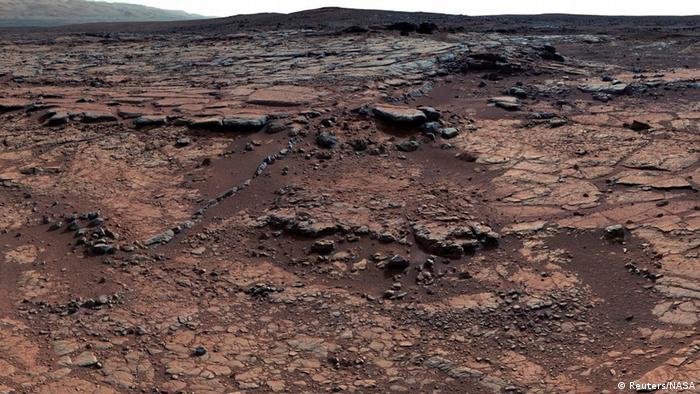 Mars' regolith is lacking in many useful resources found on Earth

Mars, after all, is considered a hostile, dead planet: It has heavy dust storm seasons, lacks useful resources, experiences strong cosmic radiation, and extreme weather conditions sometimes reach temperatures of −153 °C, which is colder than Antarctica. All of these factors prevent humans from going and staying there easily.

Another factor is that any trip to Mars would most likely be one-way journey. A spaceship that would theoretically be able to propel humans from the surface of Mars back to an orbiter or to Earth would need to be as heavy as a Soyuz or Ariane rocket. It would be almost impossible to land such a huge space ship, loaded with fuel, safely on the planet's surface. That psysical limitation, due to Mars' gravity, does not apply to our Moon, as the Apollo missions have shown.

Previous robotic observation missions of the Red Planet, like ExoMars, NASA's Mars rovers and numerous orbiters have managed to cover just 3% of the planet's surface in great detail. Exactly what is happening on the rest of the planet's surface remains a mystery. Even more important: Nobody knows what is going on deep inside the regolith. 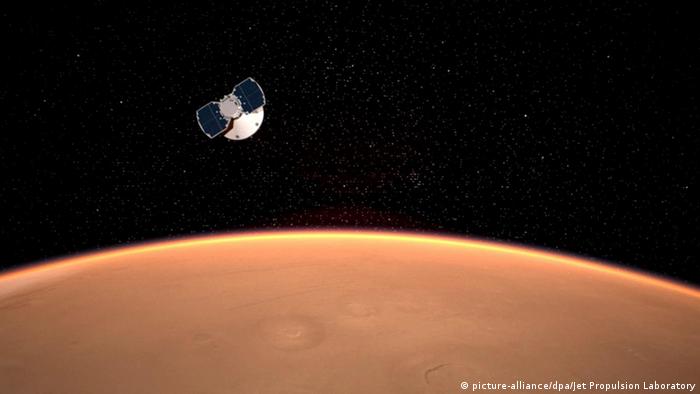 Satellites and rovers have explored Mars, but no humans yet

Every year, space agencies make new promises and present new plans for human missions to Mars. Two years ago, NASA presented a detailed  plan  to reach Mars by 2033. Elon Musk of SpaceX is even more ambitious. He announced a  human mission to Mars for 2024.

But when will we go to the Mars and achieve the dream that has been a subject of so many movies, books, comics, and art?

Kinkeldey told DW that, even though everyone has a particular date in mind for humans reaching Mars, it is still impossible to give any accurate prognosis at the moment.

But building a functioning habitat like MaMBA allows many to hope that it will be sooner rather than later.

Four astronauts aboard the SpaceX Dragon arrived safely at the International Space Station for a six-month mission.