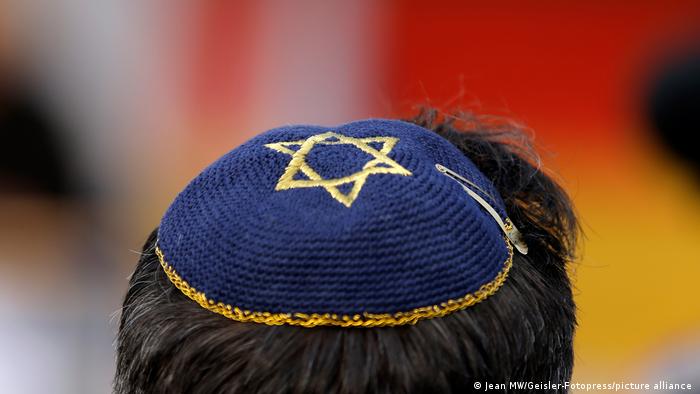 An 18-year-old Jewish man in the western German city of Cologne was hospitalized over the weekend after suffering severe injuries in what appears to have been an antisemitic attack.

The man was sitting in a city park with a friend late Friday night when he was verbally abused by a group of teens for wearing the traditional Jewish yarmulke, or kippah, head covering.

The verbal attacks quickly escalated into a physical attack as the group of 10 perpetrators punched and kicked the victim before stealing his yarmulke.

Police later took the victim to a local hospital for treatment of wounds including a broken nose and broken cheekbone.

Shortly after the incident police apprehended two youths they recognized from surveillance footage from the scene. The youths, 18 and 19 years old, were later released but remain suspects according to police.

"I am appalled by this horrific and cowardly attack on a young man who was violently assaulted by a group and seriously injured for apparently antisemitic motives," Germany's Federal Antisemitism Commissioner Felix Klein told the DPA news agency on Monday.

"I hope that the suspected perpetrators, who are apparently only 18 and 19 years old, will be ordered to undergo educational programs in which they will be taught the basic principles of the rule of law and of our free democratic order," said Klein.

Authorities say the federal police's State Protection Service will lead the investigation due to the apparent antisemitic nature of the attack.