Annalena Baerbock was telling a story about a pupil refusing to complete an assignment containing the racial slur. Meanwhile, Armin Laschet has once again apologized for laughing while visiting a flood-stricken town. 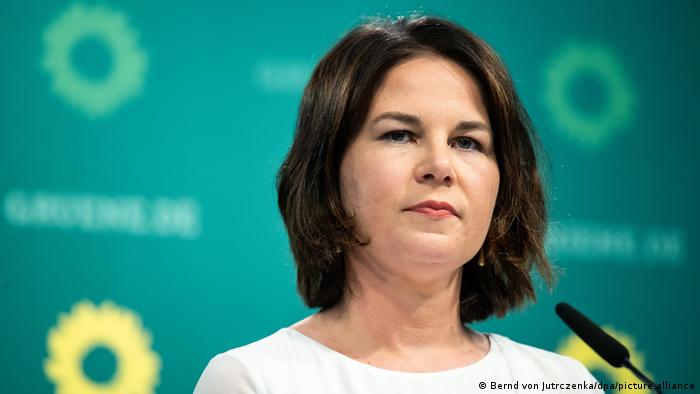 With just two months to go before Germany heads to the polls to elect a new chancellor, the Green Party's candidate, Annalena Baerbock, on Sunday apologized for using the N-word during an interview.

Baerbock has emerged as the main rival to Armin Laschet (CDU) in the race to succeed Angela Merkel, but both candidates have attracted criticism for inappropriate gestures over the last week.

On Sunday, the Greens candidate said she used the N-word while retelling a story to the Central Council of Jews in Germany. The story was about a schoolchild in her neighborhood who refused to complete a worksheet containing the racial slur. Baerbock praised the pupil for his anti-racist stance. The interaction was recorded as part of the interview which is set to air on August 1.

"Unfortunately, in the recording of the interview, I quoted the N-word. That was wrong and I'm sorry," Baerbock said in a nine-part series of tweets.

Baerbock said that she used the slur during a discussion about antisemitism and racism.

"The son of a friend was supposed to write a picture story on a worksheet with the N word on it," she tweeted. "That incident still upsets me today. Unfortunately, in the recording of the interview, I quoted the N-word in the emotional description of this unspeakable incident."

The interview might prove itself to be yet another blow to Baerbock's already troubled public image.  She has already faced accusations of failing to report some party-related funds and was forced to correct some claims made in her public resume. More recently, she was accused of plagiarism in a book she wrote.

Baerbock was not the only chancellor candidate apologizing on Sunday.

The country's conservative candidate to replace Merkel, Armin Laschet, found himself in hot water last week for laughing during a visit to the flood-hit town of Erftstadt.

The recording of him apparently enjoying a joke while President Frank-Walter Steinmeier is talking to reporters about helping flood victims quickly found its way to social media, where it was shared under hashtag "Laschet laughs."

The conservative politician quickly responded by issuing a public apology, but he is still facing criticism even days after the incident.

"It was stupid and shouldn't have happened and I regret it," Laschet told ZDF television on Sunday. "I am sorry, I can't say much more."

The latest polls put Laschet's CDU at around 28% of the vote, maintaining a comfortable lead over Baerbock's Greens at around 18%. The next closest rivals are the center-left Social Democrats (SPD) with around 16% of the vote.

Finance Minister Olaf Scholz, a former mayor of Hamburg and Merkel's deputy in the grand coalition, is the SPD's choice to be the new chancellor with Germans heading to the ballot box on September 26.