Until recently, a massive coronavirus outbreak at a Tönnies slaughterhouse has largely been confined to workers. There has now been a noticeable spread into the community, tests have revealed. 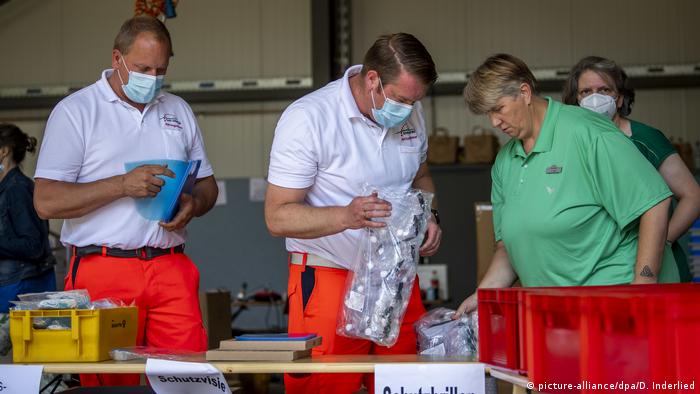 There has been a "noticeable" increase in the number of coronavirus infections among the wider population of Gütersloh, the western German region surrounding a slaughterhouse that suffered a massive outbreak, local authorities reported on Sunday.

To date, infections have largely been limited to the employees and associates of the Tönnies meat processing plant, however, the outbreak appears to have spread to the community.

Over the past seven days, 75 cases were found in the wider population with no connection to the abattoir. That is 28 more than previously reported.

The district said that this is likely due to an increased amount of testing in the area. Many of those tested showed no symptoms and there was no increase in the number of patients.

With summer holidays coming up, non-symptomatic people have a greater incentive to get tested and potentially be allowed to travel out of the lockdown area.

By Friday evening, 2,203 coronavirus infections were recorded in the Gütersloh district, most of whom worked in the meat plant or were associated with it. Of these, 748 are considered to have recovered and 1,434 are still infected.

Some 29 patients are currently being treated as inpatients, five of whom are in intensive care.

A total of 21 people have died since the beginning of the pandemic in the region.

The outbreak has led to a state decree that all employees in the meat industry must be tested for the coronavirus at least twice a week starting in July.

Companies are also required to collect the names and addresses of all people present on the business premises.

A significant number of clusters in Germany have been linked to meat processing plants that have exceptionally poor working and living conditions for predominantly Eastern European workers.

The latest outbreak has triggered calls for a complete overhaul of working conditions in the meat industry, repercussions for Tönnies, and uniform nationwide guidelines for dealing with coronavirus hotspots.

As a result of the outbreak, the state government has ordered an extensive lockdown for the districts of Gütersloh and Warendorf, initially until next Tuesday. By then, at the latest, the government must decide how to proceed.

Officials in northwestern Germany have insisted the wider community is not yet at risk. But they complain that they've lost trust in the country's largest meat processing firm over delays in contacting staff. (20.06.2020)

Germany: Almost no new cases in coronavirus hotspot of Gütersloh

The beleaguered community of Gütersloh reported only one case of COVID-19 during mass-testing meant to identify the scope of the outbreak. Residents are on lockdown until June 30. (25.06.2020)