Germany demolished five-time champions Brazil 7-1 in one of the most absurd World Cup matches ever. The Germans finished the game off in a surreal 20-minute period in the first half. 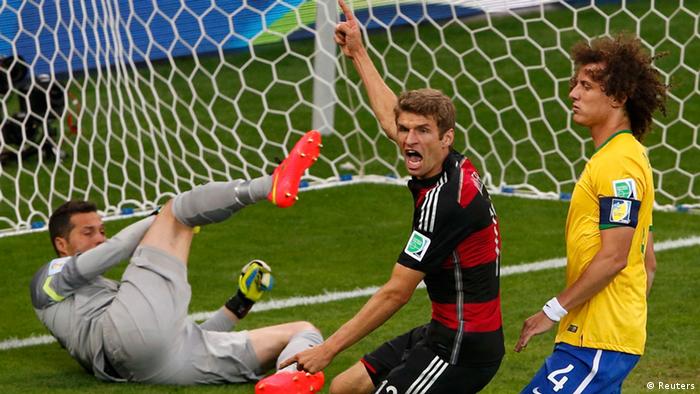 It turned out to be one of the most astonishing World Cup matches ever. Maybe the hosts Brazil sensed before the game that the planets were not aligned for them - the football gods had deprived them of both their best attacker and their best defender.

Their 22-year-old messianic talisman Neymar was reduced to watching the match from home, recovering from the fractured vertebra he suffered in the quarterfinal, while Bayern Munich's Dante replaced captain Thiago Silva, suspended thanks to the eminently avoidable yellow card he received in the same game.

In place of the stricken Neymar, Brazil coach Luiz Felipe Scolari handed 21-year-old Bernard a start. Germany boss Joachim Löw, on the other hand, kept faith with the side that beat France in the last eight on Friday. That somewhat laborious 1-0 win could not have been more different to what unfolded on Tuesday night (08.07.2014). 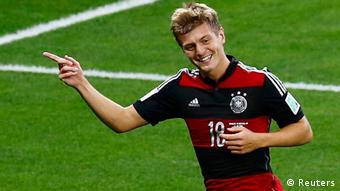 The game began with the passion - occasionally dangerous - that fans had come to expect from Brazil in this tournament, but it was the Germans who showed composure and ruthlessness, and needed just 10 minutes to open their account. The team's leading goalscorer Thomas Müller - completely unmarked - connected with a Toni Kroos corner and slipped it under the goalkeeper Julio Cesar. It was the opening hammer blow of a 20-minute period that few Brazilians will forget in a hurry.

The Selecao initially responded by throwing even more into their tackles, controlling possession in midfield - but they were leaving open the danger of a German counter-attack. Far too open. The early goal set the game up in exactly the same way as the quarterfinal against France. Only now, instead of sitting on their lead, the Germans took their opportunities: Klose doubled the score in the 23rd minute after a rebound from his own shot - the goal that put him out on his own as the World Cup's all-time leading goal-scorer, with 16 goals.

Brazil were reeling and bewildered - and Germany responded ruthlessly by snatching two more goals in three minutes, both from midfielder Toni Kroos, who finished off simple moves down the middle of the pitch. Brazil were collapsing under the lightest of touches. It was 4-0, and Brazil's World Cup was over in 26 minutes. 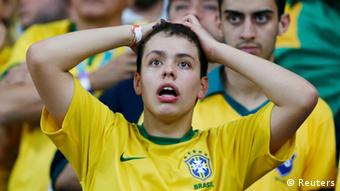 Brazilian fans had to pinch themselves

Germany had five before the half-hour mark. This time Sami Khedira finished off the devastating one-twos that Germany were playing at will around their hosts' penalty area. Mesut Özil laid the ball off to his erstwhile Real Madrid team-mate, who finished it off from roughly the same position that Kroos had got his two, and similarly free from any opposition interference.

At half time, Brazilians were openly weeping in the stands, or open-mouthed in disbelief. They weren't the only ones.

Germany add a footnote or two

Brazil, booing as they went into the interval, were granted a little applause by their fans in the opening minutes of the second half. The Selecao rattled off a string of chances - only to come up against Manuel Neuer, who beat away a close-range effort from Oscar and made an incredible double-save from Paulinho.

But after that mild onslaught, the second half tailed off, punctuated only by Germany's penetrating counter-attacks. Andre Schürrle's 68th-minute goal, once again the result of some zippy, decisive passing inside Brazil's penalty area - was merely the first of two minor footnotes for the German team, who occasionally looked as astonished as everyone else.

Germany's seventh and final goal, and Schürrle's second, came in the 79th minute, and was almost lazily completed. Finding himself clear on goal on the left, but at a tight angle, the Chelsea man whipped a shot high through Cesar's arms and in off the crossbar. The Brazil goalkeeper fell back onto the turf and stared up into the sky - those planets really weren't aligned tonight.

Three key points: Why Brazil went down in flames

Ahead of the first World Cup semifinal, everyone predicted a close match. Everyone was wrong. Brazil's mauling by Germany revealed problems galore on and off the pitch. (08.07.2014)

Opinion: Now or never! - The Schweini generation has to finish it off

Let’s forget the fact that Germany doesn't have a good record against Brazil, it’s time for an upset. It has to happen now, according to DW's Volker Wagener, because the 'Schweinsteiger Generation' hasn't proven itself. (08.07.2014)

Brazil is coming to terms with losing Neymar from the World Cup. Ahead of the semi-final against Germany everyone continues to talk about him. He won’t be easy to replace, perhaps voodoo might help? (07.07.2014)

Thilo Kehrer has moved to West Ham after being frozen out at Paris Saint-Germain. The defender has the World Cup in mind. But will his former PSG teammate, Julian Draxler, follow suit, or let his career drift?

With the 2022 World Cup still months away, there are high expectations for coach Hansi Flick and his revamped Germany squad. The team sailed through World Cup qualifying, but without facing the strongest of opponents.