Five people died and several more were injured after a passenger train derailed in the Garmisch-Partenkirchen Alpine region of Bavaria. Officials have now said there are no further people unaccounted for.

At least four dead in train crash in Germany

Several people were killed and 40 more were injured on Friday when a regional passenger train derailed in the southern German state of Bavaria.

The death toll rose to five on Saturday after police recovered a further body.

The recovery effort was difficult because one of the overturned carriages had to be lifted off the ground first.

Police said on Sunday there was no longer anyone missing.

What happened in the accident?

Around 140 passengers were on board at the time of the accident.

A police spokesperson said a major operation to free people from the wreckage had been completed.

"As far as we can tell, all the people have been rescued from the train," the spokesperson said, adding that removing the overturned wagons, however, would "certainly take a few days."

Bavarian Interior Minister Joachim Herrmann said that four people confirmed dead were adult women. The fifth victim was a teenage boy, according to police. Many children are known to have been on board the train. 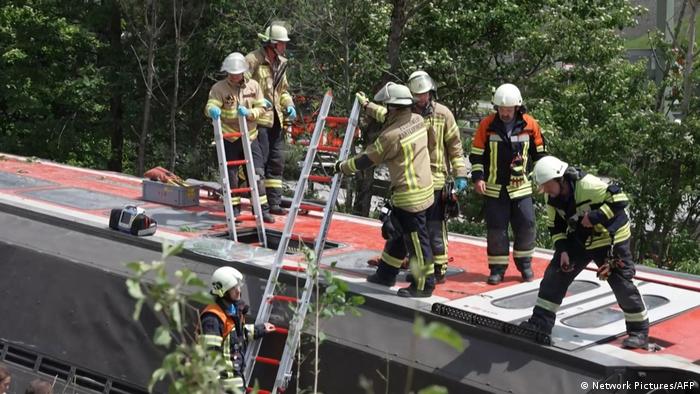 What caused the train to derail?

It was not immediately clear what caused the train traveling from the Alpine ski resort of Garmisch-Partenkirchen toward Munich to derail at about 12:20 local time (10:20 UTC).

Images from the scene showed several carriages overturned, intertwined with tree branches and partly rolled down an embankment.

Six rescue helicopters were in use to bring the injured to hospitals for treatment, according to a spokesperson for the ADAC Air Rescue service.

Part of the route between Munich and Garmisch-Partenkirchen has been blocked off and traffic is being diverted. A police spokesperson said the train tracks and neighboring highway may have to remain closed into the weekend. Prosecutors have launched an investigation into the cause of the incident.

German Chancellor Olaf Scholz said he was shocked by the news and images of the accident.

"Our sympathy is with the relatives, with the injured, to whom we wish a speedy recovery," he told broadcasters RTL and ntv.

The state premier of Bavaria, Markus Söder, said on Saturday during a visit to the site of the accident that it was an "incomprehensible thing to happen."

"We hope very much that there are no further deaths," he said, adding that such an accident was always a shock and a "blow to the heart."

Transport Minister Volker Wissing, who will visit the area on Saturday, said his ministry was in close contact with rail operator Deutsche Bahn and "providing support wherever we can."

"My thoughts are with the relatives and injured," he said. "Our experts are already on site to work with the investigating authorities to determine the cause of the accident." 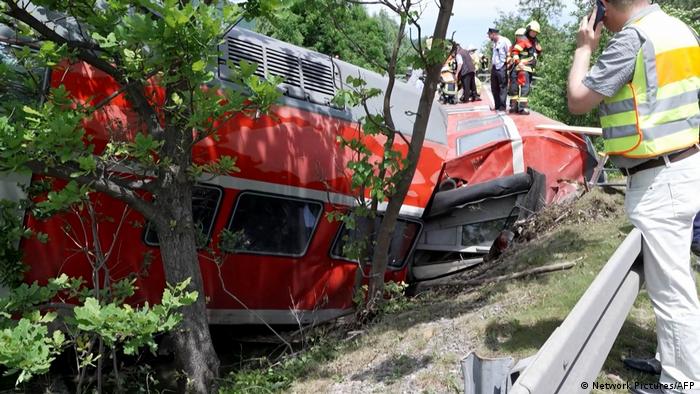 The incident happened as Germany heads into the Pentecost long weekend and at the start of Bavaria's school holidays. It also came two days after the introduction of a €9 ($10) transport ticket allowing countrywide travel for one month, which has led to increased passenger numbers on regional trains.

The Alpine town of Garmisch-Partenkirchen lies near the border with Austria and is a popular destination for hikers in summer. The region is set to host the G7 summit of world leaders later this month.

At least four dead in train crash in Germany