Germany: Condor to keep flying thanks to government loan

As a subsidiary of Thomas Cook, the German airline's future has been in doubt. The firm is now working to ensure its insolvent British parent company cannot make any financial demands. 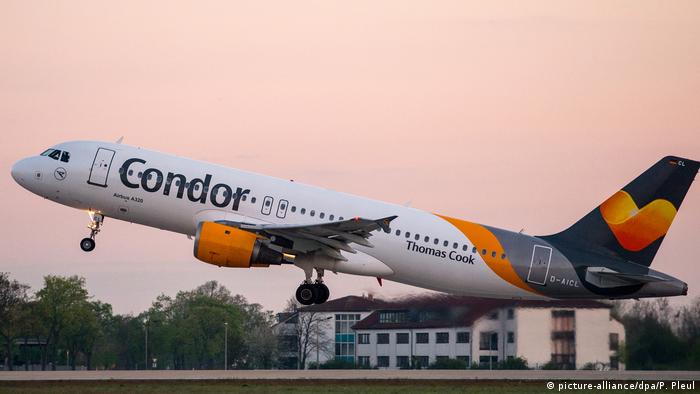 The immediate future of Condor, the German airline and subsidiary of the now insolvent Thomas Cook travel agency, was secured on Tuesday following the state's assurances of a €380 million ($420 million) loan.

The  bridging loan from the German government and the state of Hesse, where the firm is based, was confirmed by the airline.

"This step, under the current situation, is the best for our clients, our business partners and for us. This way, we can be fully independent from the Thomas Cook Group plc and gain more security for our future," a Condor statement read.

The European Commission must now approve the loan before the money can be transferred.

German Economy Minister Peter Altmaier also confirmed that the government had approved the deal and that Berlin was in talks with Brussels over the Commission's ratification.

The finance minister of Hesse, Thomas Schaefer, said that his state could carry 50% of the loan and the central government would fund the other half.

"Condor is a profitable company from Hesse that became a victim of its British parent company and of Brexit. We and the federal government believe that a new owner can keep Condor in the air for the long term."

"We believe that this company from Hesse has a future and that it will continue to bring many holidaymakers to their destinations. But this support means that work has just begun for Condor. Now, the company has to start over without Thomas Cook."

Condor CEO Ralf Teckentrup said the airline was already in talks with potential buyers. The company also said that it planned to file a request to separate its business from Thomas Cook in a procedure that is specific to German insolvency law. This would exempt Condor from any potential demands by its parent company.

"The 4,900 employees, as well as partners and clients of Condor, thank the German government and the state government of Hesse for their commitment," Teckentrup said.

"Seeing as our liquidity was used up by our insolvent parent company in a seasonally weaker bookings period, we need this bridging funding for the winter. This commitment is an important step to securing our future."

A look at German tourism over the ages

The bankruptcy of the travel company Thomas Cook does not mark the end of mass tourism. But it is a warning sign, says tourism researcher Hasso Spode. DW takes a look at the history of German tourism. (24.09.2019)

The day after her CDU party's dismal showing in the elections, Merkel announced her gradual retreat from politics. Now a recount could leave the party with a weak mandate. How could this have happened, and what's next? (13.11.2018)