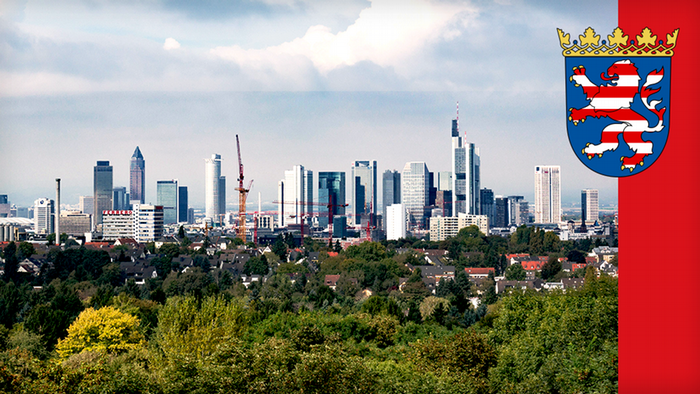 Hesse lies in the middle of Germany and is a state of contrasts: idyllic towns with half-timbered houses in northern and southern Hesse on the one hand, and, on the other, the famous skyline of skyscrapers in Frankfurt. You don't have to be an architectural expert to be inspired by both worlds.

Frankfurt may not be the state capital — that's Wiesbaden — but with just under 800,000 inhabitants, it’s the largest city in Hesse. It’s also Germany's main financial center, a metropolis for art lovers, the birthplace of the poet Johann Wolfgang von Goethe and the home of Äppelwois, or apple cider. There are plenty of reasons to join us on this sightseeing tour in Hesse.
Check-in moderator Lukas Stege has an appointment to try stand-up paddling on the River Main. He visited the pulsating metropolis on the Main before the coronavirus crisis.

Frankfurt from a bird's eye view

Destroyed in World War II by bombing raids, Frankfurt has had its old town back since 2018: The narrow alleys and old Franconian facades have been reconstructed, behind which old buildings, which have been rebuilt in keeping with their historical value, alternate with new buildings that appear historic.

Darmstadt, located about 30 kilometers south of Frankfurt, has not been the focus of Germany's visitors until recently. But that could soon change because in summer 2021, Darmstadt became a UNESCO World Heritage Site, more specifically, the Mathildenhöhe artists' colony. DW presenter Nicole Frölich visited this unique location known for its architecture and art history shortly before it was awarded the UNESCO title.

Active holidays on the River Lahn

The Lahn is a tributary of the Rhine that is very popular with people who like to holiday on the water. An especially lovely section lies in southern Hesse, according to DW's travel magazine Check-in host, Nicole Frölich: the romantic Lahn valley. She toured it before the coronoavirus crisis.

The Brothers Grimm collected many of the folk tales for which they became known worldwide in northern Hesse, around the city of Kassel. The city has devoted an entire world to their work.

The landscape park with the water features and Hercules statue was created at the beginning of the 18th century. The unique park was added to the UNESCO World Heritage List in 2013 as an exceptional cultural monument. Let us show you Europe's largest hilltop park from a bird's eye perspective.

A medieval castle with many towers and bay windows sits on a basalt hilltop high above the town of Braunfels. Over the centuries, its enthusiastic owners kept adding new Baroque and Gothic revival elements, creating a distinctive fairy tale castle in the Middle Hesse region.