The regional constitutional court in Brandenburg has rejected a law enshrining gender equality among political parties. A far-right party had complained about having too few women to meet the state's requirements. 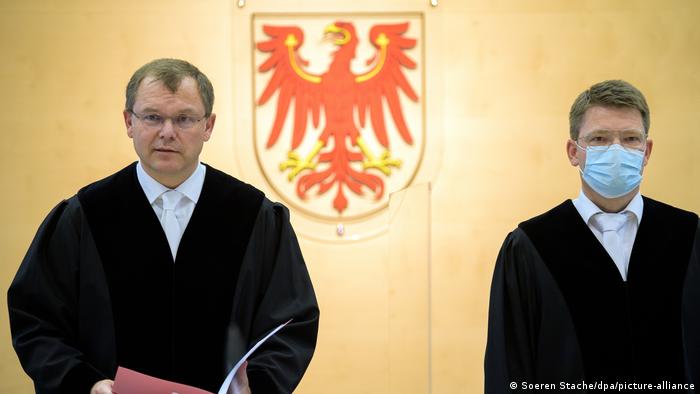 The constitutional court in the eastern German state of Brandenburg ruled on Friday that a law on gender equality on local party lists was unconstitutional.

The so-called Parity Law would have forced parties standing for election in Brandenburg to fulfill a quota of women on their party lists, by alternatingly considering men and women for positions on the list. It would have first come into effect for the 2024 state elections.

Brandenburg had been a pioneer in Germany for its gender equality law, although a similar proposal was also shot down in Thuringia by its local constitutional court.

The case was brought to the Potsdam court in August by members of the extreme right-wing NPD and far-right populist AfD parties. The NPD complained that it would have been impossible to fulfill the quota considering their low number of female members. The far-right party also claimed that the rules discriminated against men.

The court agreed that the legislation "harmed the NPD's organizational freedom … freedom to choose nominations and the party's equal opportunities in the elections."

"The requirement of equal numbers on the list could in fact result in the exclusion of certain candidates from the list. In the case of parties with a very unbalanced gender ratio, it could also lead to considerable difficulties in drawing up lists with alternating candidates," a statement released by the court said.

German parties standing for election must create a numbered list of candidates to which seats are then proportionally allocated according to the share of the votes that the party wins. The Parity Law would have obliged parties to give alternating numbers on the list to men and women respectively.

This is what the court objected to as an infringement of the right of political parties to freely choose their candidates, and it condemned the state involvement in that process, saying through "the Parity Law, the legislature deprives the democratic decision-making process of an essential part by influencing the composition of the lists."

The president of Brandenburg's state parliament, Ulrike Liedtke, from the center-left Social Democratic Party, had defended the law saying that equal representation of women was a democratic necessity considering women make up half of the population.

The defense lawyer for the state argued that Brandenburg was obliged to take effective steps to ensure gender equality in accordance with the constitution and that no single party's chances were hurt by the rule since it was applied equally across the parties.

The court saw things differently, saying "the equal right of citizens to vote and to be elected is one of the essential foundations of the state order and is to be understood in terms of strict and formal equality in the admission to parliamentary elections."

While the far-right AfD is the second biggest party in the Brandenburg state legislature, the NPD holds no seats.