A sketch involving a white cabaret artist dressed up as a fictional Black dictator prompted backlash. Social media users decried the portrayal as racist, criticizing the public service broadcaster as well for airing it. 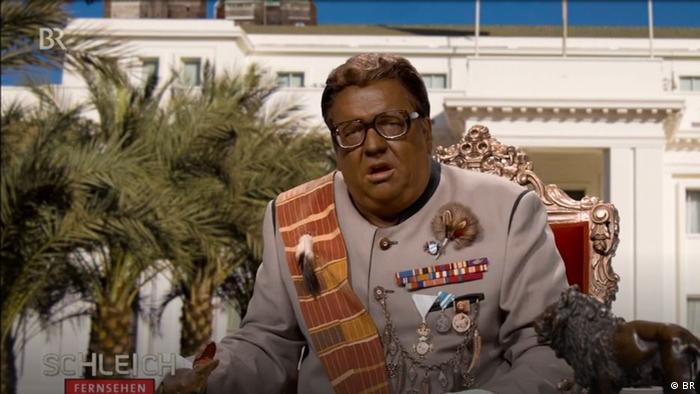 The criticism comes amid a growing backlash in Germany over repeated instances of blackface and all-white panel discussions on racism in German television shows.

What happened in the sketch?

The character Maxwell Strauss, head of the fictitious state of Mbongalo, gives Germany advice on how to deal with the pandemic. He calls for the opposition to "shut up."

The sketch is a parody of Franz Josef Strauss, a former leader of Bavaria's conservative Christian Social Union (CSU). Strauss, who died in 1988, was also known for his coarse pronunciation and for telling critics to keep their mouths shut.

Wearing a made-up uniform meant to resemble a dictator and wearing dark makeup, the character proclaims that he would make a good chancellor candidate.

"But I would be a really good chancellor. The first really black chancellor of Germany," Schleich says, after waving a stuffed baby crocodile.

How did people react online?

The sketch sparked outrage online, spreading widely after journalist Malcolm Ohanwe posted a video of the show on Twitter.

"Before having a Black man host a show on Bavarian television, the editorial department prefers to paint themselves black and make fun of African countries. Do we have to understand this?"

Youtuber Rezo also criticized that the sketch was produced by a public broadcaster, writing: "Boy wtf? This is ACTUALLY public service broadcast.... Blackfacing in 2021 paid by fees."

A different user wrote: "Seems like they didn't learn from their past mistakes." The account is referring to a radio host for the Bavarian station Bayern3, who insulted the Korean pop band BTS. He had compared the band to the corona virus and called them different names.

Blackface has a long history of using negative, racial stereotypes for the entertainment of historically largely white audiences.

Most commonly it's a white person painting their face darker to resemble a Black person.

The practice came into fashion in the 19th century with so-called minstrel shows in the US, which trivialized slavery. White actors portrayed Black slaves in a stereotypical manner, painting themselves in dark colors and drawing exaggeratedly thick lips.

Performers will often engage in exaggerated impressions that are considered highly offensive, particularly for people of color — for example, mocking "African" accents.

How has the channel responded?

The BR said it was aware of the criticism sparked by the sketch, but defended the performer.

"The editorial team was aware of the discussions on the topic of 'blackfacing' and the problems associated with it, and that's why there were intensive discussions with Helmut Schleich about this feature in the run-up to the broadcast," the station responded to a query by German newspaper, the Süddeutsche Zeitung.

"In a satire format, however, the artist must also be granted a certain amount of freedom for satirical exaggerations."

BR went on to say that artistic freedom sometimes tests the limits. The character Maxwell Strauss is a caricature and "cannot be judged separately from the text." The content of the sketch is making fun of an "authoritarian understanding of power" and "absolutist" claims to power.

The cabaret artist recently spoke with the Münchener Merkur newspaper about his character Maxwell Strauss: "Suddenly you ask yourself if you can still play this character with your face painted black."

He added that giving a lecture on colonialism "is by no means funnier" than portraying the character.

Debate over racism in TV

Germany's local public broadcasters have repeatedly come under fire for a lack of diversity in their programming and for continuing to air comedy sketches featuring performers in blackface.

In recent weeks, an all-white panel discussion on racism prompted a wave of backlash.

The panel participants more or less all agreed that the terms should still be used, downplaying the impact the terms have on black people and people of color.

The reaction to the show on social media was swift, with many especially younger viewers delivering a clear message: They don't want to put up with racism - especially on primetime German TV - anymore.

Ballerina Chloe Lopes Gomes accuses a ballet mistress at the Berlin State Ballet of racism. She sees herself as a victim of so-called whitefacing.

Prime Minister Justin Trudeau apologized--twice--after photos and a video emerged of him in brownface makeup on 3 separate occassions. The images emerged the week after he launched his reelection campaign.

The controversial pastries feature thick lips, fez hats, and even a bone weaved into the hair. The bakery in Cologne has caused nationwide anger, but the owner insists there were "no racist thoughts" behind them.