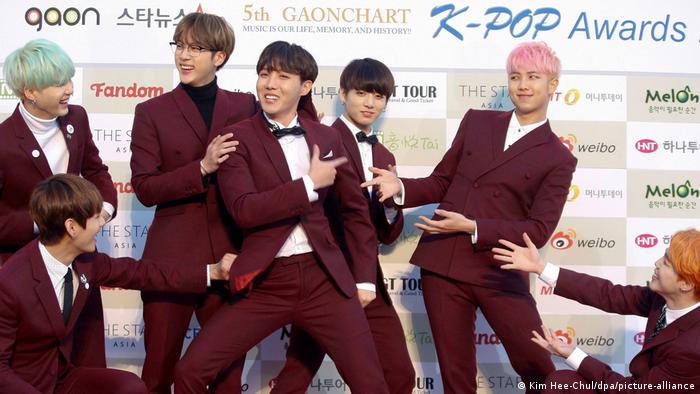 The group's army of loyal fans took to social media accuse the station's Matthias Matuschik of racism after he blasted the band's cover of Coldplay's "Fix You."

What did the Bayern 3 host say about BTS?

Matuschik compared the band to the COVID-19 virus, describing them as "some crappy virus that hopefully there will be a vaccine for soon as well."

"These little a**holes brag about the fact they covered 'Fix You' from Coldplay, this is blasphemy," he said. "For this you will be vacationing in North Korea for the next 20 years!"

How have fans responded?

Matuschik's comments have prompted accusations of racism, in particular regarding the comparison to the coronavirus. Since the pandemic emerged in China in late 2019, there has been an uptick in reports of racism or xenophobia against Chinese and other Asian people.

"At a time of anti-Asianness it's not only deplorable but dangerous for someone like Matthias Matuschik to liken COVID to a South Korean group like BTS," said one Twitter user. "This only incites hate, violence to Asians from various backgrounds."

One fan account struck a similar note and took Bayern 3 to task for a statement appearing to defend the host. "What he said shouldn't be tolerated," it maintained.

A fan account for BTS member Jimin said the views expressed by were objectively racist.

"Expressing that these are only one's opinions and passing accountability to people who took offense come from a racist mentality," it said.

How the radio station responded

Bayern 3 defended their presenter and, while the station did concede he may have gone too far, it said this had not been his intention.

"It is the character of this show and also of the presenter to express his opinion clearly, openly and unvarnished," the station said in a statement.

"In this case, he overshot the mark in his choice of words in an attempt to present his opinion in an ironically exaggerated manner and with exaggeratedly feigned excitement, and thus hurt the feelings of the BTS fans. But, as he assured us, this was in no way his intention. He only wanted to express his displeasure about the above-mentioned cover version."

BTS, also known as the Bangtan Boys, are a seven-member K-pop band with a musical style that has evolved from hip-hop to include a wide range of genres.

The band has ascended to global stardom since their debut in 2013, with a string of sold-out shows in Los Angeles, Paris and London when concerts were last possible in 2019.

The group has even established itself in the world's biggest music market, the notoriously impenetrable United States. The all-English single "Dynamite" entered the Billboard Hot 100 at number one last August, making BTS the first South Korean act to top the US chart.