The suspect had contacted the "Islamic State" militant group, but said he attempted to defraud them, prosecutors said. The Syrian planned to disguise vehicles as police patrol cars and fill them with explosives. 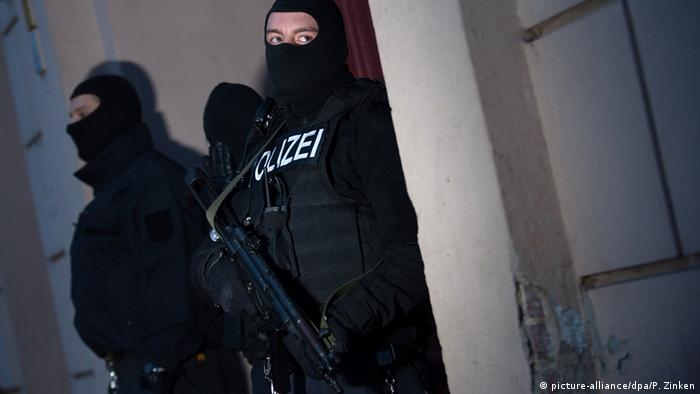 In her New Year's speech, German Chancellor Angela Merkel has called on citizens to go into 2017 with optimism and defy terrorism. But to guarantee "security in freedom," she said new security measures may be necessary.

German police in the western state of Saarland arrested a Syrian migrant who solicited funds from the "Islamic State" militant group in order to carry out a high-casualty terrorist attack, prosecutors said on Monday.

The prosecutor's office in Saarbrücken said the man asked an "Islamic State" contact for money "so we could purchase vehicles which he could load with explosives and which he wanted to drive into crowds … and blow up in order to kill unknown numbers of people who do not follow the Muslim faith."

While in custody, he confirmed to police that he contacted the militant group in December, but that he was attempting to defraud them.

"He said he wanted the money from ISIS to support his family back in Syria," prosecutor Christoph Rebmann told Reuters news agency, referring to the group by an alternative acronym.

The Syrian suspect, who hails from the militant group's de facto capital of Raqqa, entered Germany in December 2014 and received permission to stay in the country in January 2015.

The arrest comes weeks after Anis Amri, a Tunisian who had his request for asylum rejected, drove a truck into a Christmas market in Berlin, leaving 12 people dead and dozens more injured. Amri was later shot dead by Italian police on the outskirts of Milan.

"Without a doubt, the most difficult test we've faced is Islamist terrorism, which has also had us Germans in its crosshairs for many years," Merkel said.

"It's a bitter reckoning - and a despicable - when terror attacks are committed by people who came here ostensibly to seek safe haven and then received help and support, only to perpetrate such horrific attacks," she added.

She vowed to enact additional legal and policy measures to combat terrorism domestically, if necessary.

Nearly 1 million migrants arrived in Germany in 2015, many of them fleeing conflict and extreme poverty in the Middle East, Africa and Asia. Despite widespread criticism, Merkel has defended her open-door policy on asylum seekers.